A pity, the death and violence here… what a beautiful land. 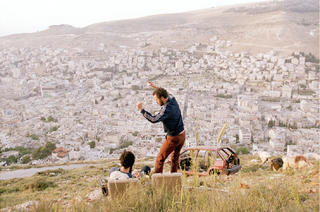 The two Palestinian leads in the movie discuss how Jewish occupation and joblessness are making them want to become suicide bombers (?)

Davids Medienkritik originally wrote on this shocking German award winning film, “Paradise Now” at the beginning of the month after its release in German Cinemas. He was not impressed and agreed with this review:

The film doesn’t show Saids’deed: Women without abdomens, men
without heads, children without arms and legs, blood and guts in
seats, burned pieces of flesh all over the place. Nothing about
that: After panning past Saids’ eyes the screen becomes bright and
white and pure.

This week Omri Ceren at Mere Rhetoric went to a sneak peek screening on the USC Campus sponsored by the USC Center on Public Diplomacy:

We expected to hate the movie: it has won awards and accolades from all the wrong people and Abu-Assad has refused to condemn suicide bombings, describing them as “a very human reaction to an extreme situation.” But the film turned out to be not only well-made but surprisingly subtle. It is unfair in some places, and there is one overarching anti-Israel theme which is difficult to justify, but it is a smart movie unworthy of the condemnation it’s received from some reviewers and bloggers…

Omri has much, much more on the movie. He shares a very honest analysis on a very controversial topic. I give his review a shaky thumbs down… which may not seem fair since I have not yet seen the movie, but I just have a hard time stomaching anyone trying to push the goodness of suicide bombing no matter how beautiful the music, scenery or actors. But, you must read his review HERE and decide for yourself!

Davids Medienkritik investigated this controversial German-Dutch-French co-production and found out a piece of disturbing news. The German Government helped fund the film. He also went to see the movie in Germany and had a much different experience:

I have to admit that I hadn’t seen the film myself at that time.

I’ve now corrected this. It was a terrible experience.

“Paradise Now” is the first openly anti-Semitic film I’ve seen in the German cinema. Joseph Goebbels would have been proud of the numerous Germans who collaborated in its production (the film is distributed by Constantin Film/Munich). He would have praised in glowing terms the fact that the German taxpayer ponied up an essential contribution to the production costs. The materials for discussion of the film in German schools authored by a federal authority from the Central Office for Political Education (BPB) would have met with his grinning approval.

Our first posting dealt with the plot. In summary, young Palestinian men gratefully accept a command from a Palestinian terror group (my interpretation, not the film’s) to assassinate Israelis in Tel Aviv. After a few false starts one of the men carries out the assassination – a suicide attack in a bus.

The only thing certain in the film is the guilt and malice of the Israelis, the “occupiers”.

Davids has much more on his movie-going experience.

It is shocking that there is not more in the news on this controversial film. It is also shocking that the German government would financially back such a film. Is it really that long ago that camps like this were in operation that this is now acceptable as “art”?