Jesse, graciously made time to hold a press conference, before loading the three local evacuees onto the buses. 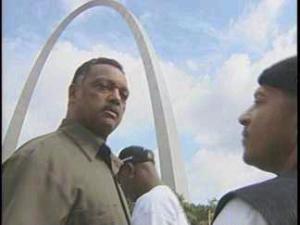 There’s plenty of room to stretch out on the bus. Of the hundreds of locally displaced and languishing citizens who “should have priority over imported workers to rebuild the city”, only three joined him in St. Louis. Two of the three speak only Spanish.

Jackson says able-bodied but displaced citizens of New Orleans should have priority over imported workers when it comes to rebuilding the city after Hurricane Katrina.

Jackson said today that thousands of hurricane evacuees are languishing in 40 states while outside contractors and imported workers rebuild.

He says service-sector jobs in restaurants and hotels are plentiful and that returning residents will live in hotel rooms and trailers and on military bases.

Jackson blamed Karl Rove and Halliburton for overseeing the reconstruction and added:

“You have the indigenous citizens having to sharecrop or subcontract to Halliburton and Bechtel,’’ he said.

Jackson said President Bush’s chief political strategist, Karl Rove, is overseeing reconstruction of the Gulf Coast, and that he and others in the White House are using Katrina to push their political agenda. He said black, Democratic-leaning voters have been radically dislocated and are being kept in “permanent exile.”

“Karl Rove is a political reconstructionist” who wants to “change the character” of Louisiana politics from the mayor’s office to its congressional representation.

“Our focus is reconstruction of the region, to get it back up economically,” Abney said. “It’s not about politics. It’s about recovery.”

He criticized the administration of President George W. Bush for failing to have a plan to help evacuees quickly return and participate in the economic opportunities now available there. Instead, that work is being awarded under no-bid contracts, he said.

“Just as there was no mass plan for rescue and there was a botched plan of radical dislocation, there’s no plan to return those who have been dispersed around the country,” Jackson said. Jackson spoke after his bus caravan arrived downtown Monday morning to pick up Hurricane Katrina survivors in the area who wanted to return home to work. The trip started early Monday in Chicago with stops planned in Memphis, Jackson and Mobile before arriving in New Orleans. Jackson said he had housing and jobs lined up for 600 people.

Michelle Malkin agrees, this is getting pathetic.