“In Louisiana, it was left for the federal government to fill the void, and you can see the consequences.”
Governor Jeb Bush
October 24, 2005
In the aftermath of Hurricane Wilma 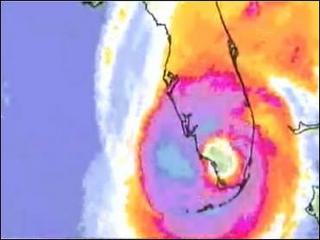 Governor Jeb Bush pointed out on Monday in the aftermath of Hurricane Wilma that some states are better than others in handling disaster:

Bush said that unlike Louisiana, Florida organized local efforts to bring people to shelters and to transport evacuees.

“In Florida, we consider it a high priority and it’s a bottom-up system,” Bush said Monday at the Collier County emergency response offices. “In Louisiana, it was left for the federal government to fill the void, and you can see the consequences.” Bush is the brother of President Bush, whose administration has been criticized for a slow, disorganized response after Katrina struck Louisiana, Mississippi and Alabama in late August.

For Wilma, the governor said he had activated 3,000 National Guard troops in advance and another 3,000 were put on alert. “It’s working the way it’s supposed to,” he said.

Bush said he was happy with the response and the minimal loss of life from Wilma. “It’s relatively good news when you consider a Category 3 storm came through this morning, and loss of life is a possibility.” 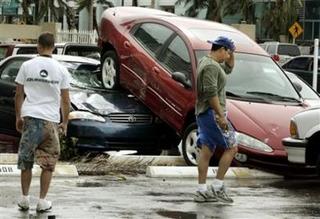 Two men look at cars piled upon each other by Hurricane Wilma in Sunny Isles, Florida October 24, 2005. (Reuters)

It will be weeks before the state gets back to normal:

The storm slammed across the state in about seven hours Monday, causing billions in insured damage and leaving 6 million people without electricity. Wilma was blamed for at least six and possibly as many as eight deaths statewide.

Officials in the state’s three most populous areas — Miami-Dade, Broward and Palm Beach counties — were prepping to distribute ice, water and other items to storm-struck residents Tuesday, while utility-restoration efforts could stretch into weeks.

“It will be days or weeks before we are back to normal,” Miami-Dade Mayor Carlos Alvarez said.