Small Dead Animals explains why it is, but of course, all Jacques Chirac’s fault! 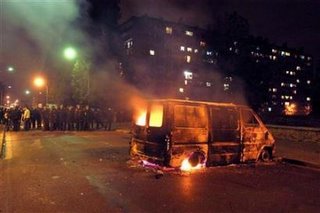 A van burns after clashes between French youth and riot police in the Paris suburb of Clichy, Octrober 29, 2005. (Reuters)

Local news outlets are blaming the government policies for the violence this weekend where at least 30 cars were torched and clashes with police sent many individuals to the hospital:

Tough new French anti-crime policies are partly to blame for riots that gripped a Paris suburb at the weekend, after the accidental deaths of two teenagers who thought they were under police chase, the opposition and rights campaigners said.

Described by the main police union as “guerrilla” violence, the three nights of rioting came a week after France’s fiery interior minister, Nicolas Sarkozy, vowed to wage a “war without mercy” on crime in the suburbs of Paris.

Critics say Sarkozy’s tough talk is feeding tensions between youths and the police while failing to cut crime in run-down suburbs, high-immigration areas facing chronic poverty, unemployment and a lack of prospects.

Nine people were arrested before dawn Sunday as dozens of youths rampaged through Clichy-sous-Bois, northeast of Paris, for a third night, setting fire to half a dozen cars in angry protest at the boys’ deaths.

And last night made the fourth night in a row of violence:

Groups of youths hurled rocks and bottles and set fire to cars in the north-eastern district of Clichy-sous-Bois, which has a large immigrant population.

The rioting began last week after two teenagers believed to be of African origin were electrocuted while fleeing from police.

The two boys, aged 15 and 17, died after getting into an electricity sub-station. They apparently thought they were being chased by officers although authorities have denied this was the case.

Previous Posting on the Clichy Riots:
Death of Immigrants Spark Riots in France