Iraqis accept a blueprint for their future! 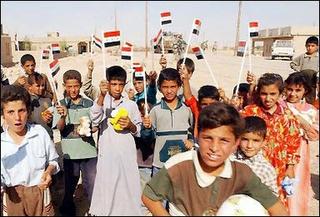 A picture released by the US Marines October 16, 2005 shows Iraqi children waving Iraqi flags as their parents vote on a new constitution in the town of al-Qaim, at the Syrian-Iraqi border in al-Anbar province in western Iraq. (AFP-USMC)

Officials today announced that the draft Constitution was accepted by voters in Iraq:

Officials said Tuesday that a majority of Iraqi voters have adopted the country’s draft constitution.

Results released by the Independent Electoral Commission of Iraq show Sunni Arabs who opposed the draft document failed to produce enough votes to defeat it.

The constitution is considered another major step in the country’s democratic transformation. It clears the way for the election of a new Iraqi parliament on Dec. 15.

Of the 18 Iraqi Provinces, 2 are believed to have rejected the charter. In Anbar, 97% of voters cast “No” ballots while in Salahuddin, 82% voted against the Constitution. Diyala, also a Sunni Province, has backed the charter. (BBC) 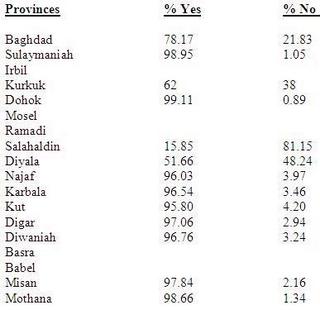 Here are the preliminary numbers coming from the provinces, via the great Hammorabi. Note that five of the provinces were yet to be announced when this was posted.

A majority of Iraqi voters adopted the draft Constitution, it was announced today:

Results released by the Independent Electoral Commission of Iraq showed that Sunni Arabs, who had sharply opposed the draft document, failed to produce the two-thirds “no” vote they would have needed in at least three of Iraq’s 18 provinces to defeat it.

Overall, 78.59 percent of voters backed the charter, while 21.41 percent opposed it, officials said.

“Whatever the results of the referendum are … it is a civilized step that aims to put Iraq on the path of true democracy,” Farid Ayar, an official with the electoral commission, said before reading the final results.

Two mostly Sunni Arab provinces Salahuddin and Anbar had voted against the constitution by at least a two-thirds vote. The commission, which had been auditing the referendum results for 10 days, said a third province where many Sunnis live Ninevah produced a “no” vote of only 55 percent.

Election commission officials and U.N. officials, who also took part in the audit, “found no cases of fraud that could affect the results of the vote,” Ayar said.

Barcepundit is excited about this wonderful news.
Big Lizards has more on this great news.
Scrappleface spoofs, “This new bit of bad news will likely drive President George Bush’s popularity ratings into the single digits.”

And, in other news from Iraq:

The rest of the cities and provinces match up pretty well.