Chavez is looking into developing a nuclear energy program. 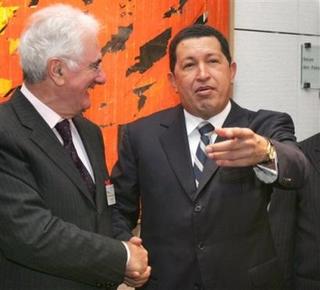 Venezuelan President Hugo Chavez said Oct. 20 that Caracas is ready to become a major supplier of oil to Europe. He also said Venezuela will serve as a guarantor of supply stability in global oil markets. Venezuela has an oil output plan through 2015 that requires $70 billion in investments, which Chavez wants foreign energy companies to help provide.

Chavez noted that under a new law, Venezuela has begun revising its contracts with foreign companies to increase taxes and royalties.

He said details were being worked out in private, “but what I assure France and its interests on this issue is that Total will continue in Venezuela, and not only in Sincor I” — a major heavy crude project in the Orinoco tar belt.

Total is a partner in the Sincor project with Norway’s Statoil and Venezuela’s state oil firm Petroleos de Venezuela S.A., or PDVSA.

Chavez said he hopes to create a “strategic alliance with France” through oil, and that support from Total is “indispensable.”

“We are going to talk with Total to keep advancing with the agreement Sincor I, making it better and perfecting it, and Sincor II, to double production and improve our wells in the Orinoco tar belt,” Chavez said.

“A Total-PDVSA alliance is a fundamental factor of the alliance between France and Venezuela,” said Chavez, who also met with French President Jacques Chirac on Wednesday.

Venezuela is the world’s fifth largest oil exporter and a major supplier to the United States.

While traveling in Europe, Chavez repeated his assertion that the US is planning to invade his country. A. M. Mora y Leon at Publius Pundit has more on Hugo’s dilemma. 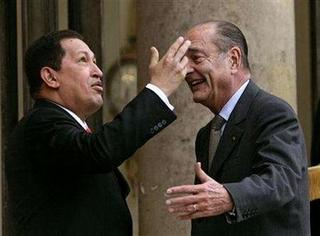 Thanks to Nohemi Alarcon for the News Tip!

Sundries, via The Anchoress (not to be confused with the JAPANESE VERSION OF THE ANCHORESS in a video clip from India), has an impressive compilation of the escapades of Hugo.