Robin,… to the Bat Cave! 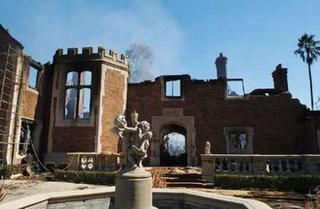 A fountain sculpture is displayed in front of the smouldering remains of a Pasadena, California mansion October 6, 2005. The fire destroyed the mansion causing an estimated $13 million loss. The mansion was used in the Batman films and the cause of the fire is under investigation. (Reuters)

A rough day for the caped crusader. The house used in many movies and the Batman television series was gutted by a fire shooting flames 70 feet into the air today:

US TV footage showed flames leaping into the sky at the Pasadena mansion with up to 70 firefighters working to keep it under control.

The mansion, made famous as Batman alter-ego Bruce Wayne’s home, was being renovated by its owners when fire broke out, the Pasadena Fire Department said.

As well as being home to Bruce Wayne, the mansion has been used in a number of other TV shows and films including 1991’s Dead Again, starring Kenneth Branagh, Emma Thompson and Derek Jacobi.

No word yet on Alfred.