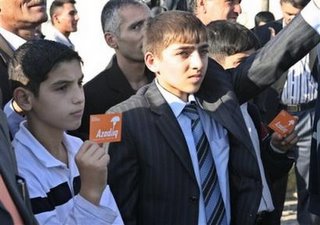 The Nov. 6 elections are shaping up as an angry showdown between a government that has said it will not tolerate mass protests – like the uprisings that led to revolutions in fellow former Soviet republics Georgia, Ukraine and Kyrgyzstan – and an opposition that seems intent on provoking a crackdown in hopes of galvanizing international support. (AP Photo/Aida Sultanova)

Azerbaijan’s parliament on Friday lifted a ban on foreign funded non-governmental groups monitoring the November 6 parliamentary election, a move international organizations had long urged to allow for more scrutiny of the poll.

The ban, described as “stupid” by one Council of Europe monitor, had barred groups that get more than 30 percent of their funding from abroad from monitoring the vote.

The move follows the Central Election Commission’s approval on Wednesday of the inking of voters’ fingers — a measure seen as a safeguard against multiple voting in countries with a history of stolen elections.

The decisions come amid mounting tension ahead of the election, seen as crucial test of democracy in the oil-rich Caucasus country.

A number of top government officials have been arrested in an alleged coup plot against President Ilham Aliyev and parliament went into extraordinary session on Friday to lift the immunity of a deputy whom authorities have implicated in the alleged plot.

Opposition groups, which have difficulty getting permission to hold rallies, have had their unauthorized rallies dispersed forcefully by police.

The United States welcomed steps taken by the government to ease concerns of vote rigging on Wednesday, but observers were skeptical about implementation with just days left ahead of the vote.

Vice President Dick Cheney made a call this week to Azerbaijan officials. The Vice President said he was confident the upcoming parliament election in Azerbaijan will be fair and transparent. 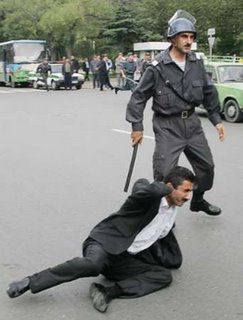 A demonstrator lies on the ground next to a policeman with a truncheon during an opposition protest in Azerbaijan’s capital Baku October 9, 2005. Riot police armed with truncheons waded into a crowd of protesters in Baku, leaving men sprawled bleeding on the ground after they tried to hold a demonstration without official permission. Azerbaijan’s opposition has been holding regular protests to demand that parliamentary elections held on November 6 will be free and fair. (Reuters)

Azerbaijan Opposition Leaders believe Azerbaijan is on the cusp of a popular revolt similar to Ukraine’s “Orange Revolution”:

But although few others in this ex-Soviet republic, on the edge of the oil-rich Caspian Sea, believe a revolution will take hold, the aftermath of the November 6 polls is widely seen as crucial to the future and stability of the country.

“November 7 is going to be a key date. The opposition is going to try to stage massive street protests, in an attempted repeat of the Ukrainian scenario,” said Fariz Ismailzade, an analyst with the Baku branch of Baltimore-based Johns Hopkins University.

“The way the authorities react will be decisive,” Ismailzade added.

In Azerbaijan too, the opposition has accused the authorities of intending to rig the upcoming vote and hardly a week has gone by without clashes between demonstrators and police.

Publius Pundit has been following the build up to the election this year.
The brilliant Central Asian expert, Nathan Hamm at The Registan will be following the news from Azerbaijan as well.