A report by the U.S. analytical team Stratfor.com says that Islamic fighters who clashed with Russian law enforcers in the city of Nalchik earlier this month had planned a large-scale attack involving a suicide aircraft mission, resembling the September 11 attacks – via MosNews.

Ex-Gitmo detainee, Russian Rasul Kudayev, was arrested this week in Nalchik, Russia, for his involvement in the most extensive terrorist assault ever carried out on a whole city earlier this month. 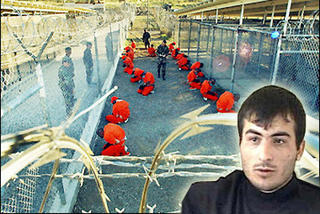 Rasul Kudayev was released from Guantanamo Bay Prison in June of 2004. He was re-arrested this week for links to the Nalchik terrorist attacks earlier this month. (MosNews)

A former prisoner of the US military base Guantanamo in Cuba, Rasul Kudayev, was detained in Nalchik Sunday, the Interfax news agency reported citing its sources in the republican law enforcement agencies.

The sources said Kudayev was arrested by local police after they had questioned other suspects arrested in the wake of the Oct. 13 raid. “There is evidence that he was involved in an attack on a traffic police post in Khasanye,” the source said.

Meanwhile, a journalist by the name of Orkhan Jemal told Ekho Moskvy radio that Kudayev had been released from Guantanamo after it was established that he had committed no crimes. He has lived in Nalchik for the past 18 months.

Kudayev was accused of taking siege of a traffic police post in a nearby village:

Interfax said that he was arrested after police questioned participants in the October 13 raid on Nalchik, the capital of the republic of Kabardino-Balkariya, in which at least 128 people were killed. It said that Mr Kudayev, 24, was suspected of taking part in an attack on a traffic police post in the village of Khasanye, near Nalchik.

In 2004 Rasul Kudayev and six other Guantanamo detainees were released without trial back into Russian society:

The seven suspected Russian Taliban fighters, released earlier from a detention center after being held in Guantanamo, are not likely to face trial, the Kommersant daily reported, even though criminal proceedings were a condition given by the United States for their release.

The seven suspects are accused of illegally crossing the border, acting as mercenaries, and forming illegal military groups. An earlier court ruling had allowed for them to be kept in custody up until June 28. Instead, they were released earlier. Neither their relatives nor their attorneys were informed of their release, the newspaper reported.

The suspects were reluctant to comment, the newspaper wrote, taking the press for special agents. One of them, Ruslan Odizhev, reportedly said that they had not been given any explanation. “They just gave us a paper and said that we were free.”

The newspaper speculates that one of the reasons they were released so soon may be the difficulty that prosecutors would have proving their involvement in the Taliban in court.

Rasul Kudayev did not want to be photographed, saying merely, “photograph the cemetery instead, so that people know that Judgment Day is near.”

Russian authorities announced today that the youngest terrorist was only 15 and that contrary to belief, the terrorists did not come from destitute families:

The youngest gunman in a group of militants who attacked the southern Russian city of Nalchik earlier this month was only 15, chairman of the Federation Council committee for the Northern Caucasus and vice-speaker of the upper house of the Russian parliament, Alexander Torshin, was quoted by the RIA-Novosti news agency as saying Thursday.

“Contrary to a widespread belief, the core of the bandit formation was not made up of people who came from destitute families,” the official said adding that, “of course, among them there were those who had taken up arms out of despair and unemployment.”

The session confirmed the earlier figures on the Oct. 13 attack on the capital of Kabardino-Balkaria. “Over 200 militants took part in the raid on the city, 93 rebels were eliminated, 30 arrested, 17 have already been criminally charged; 12 civilians were killed in the attack,” Torshin said. It was not clear whether the 15-year-old was among those killed.