Again, today, the EU looked to be in crisis as Austria stood apart from the rest of the members in protesting a full membership for Turkey. But, alas, Austria came around to join with the other European members in welcoming Turkey into formal membership talks.

Failure to start the membership talks would be seen as a serious blow to the credibility of the EU, which made Turkey an associate member in 1963 with the prospect of future membership. This year, the bloc saw its proposed constitution collapse when Dutch and French voters rejected it, while a nasty spat between France and Britain over EU funding in June left it without a budget for the 2007-13 period. 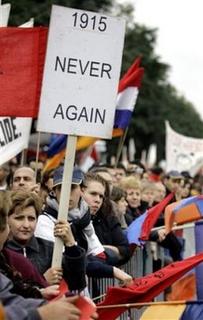 Armenians from all over Europe demonstrate in front of the Kiem conference center, in Luxembourg, Monday Oct.3, 2005, calling on Turkey and the EU to recognize the mass killings of Armenians around the time of World War I as genocide. British Foreign Secretary Jack Straw said Monday that crisis talks between European Union foreign ministers over how to bring Turkey into the EU were in trouble, suggesting entry talks with Ankara may not start as planned later in the day. (AP)

Negotiations are stalled over Turkey’s entry into the EU today:

Hours before the European Union was to start entry talks with Turkey — whose leaders remained in Ankara, awaiting progress in Luxembourg — British Foreign Secretary Jack Straw admitted Monday that discussions were at a “difficult stage.”

“I hoped … that the outcome would be a conclusion with the arrival of a Turkish delegation to begin the (EU) accession conference later this afternoon. But that is by no means certain,” said Straw.

“These negotiations are hard and difficult,” he added, shortly before EU ministers resumed formal discussions on the standoff.

The talks are blocked by Austrian demands that the EU offer the vast mainly Muslim country something less than full membership. Late-night negotiations Sunday failed to break the deadlock.

Failure to start the Turkey talks would only deepen an EU crisis triggered by French and Dutch voters’ rejection of the bloc’s draft constitution in May and June. Many cited opposition to Turkey’s EU hopes as a reason for voting no.

Austria is blocking the Muslim nation from becoming a full EU member:

That would add a crucial condition to the “negotiating framework” the EU leaders agreed on in December, which unambiguously proclaims that “the shared objective of the negotiations is (Turkey’s) accession” to the EU.

“We have a great responsibility” to Ankara, which was given a prospect of EU membership more than four decades ago, said Luxembourg Foreign Minister Jean Asselborn. “An agreement among the EU foreign ministers would be important for the credibility of Europe.”

Straw said he had spoken by telephone with Turkish Foreign Minister Abdullah Gul in Ankara, who was preparing to fly to Luxembourg for the entry talks.

Straw said Monday’s foreign ministers meeting would show “whether there is a will” to begin the negotiations with Turkey, something that requires unanimous approval of all 25 EU governments.

But the EU’s last-minute fence-sitting threw that prospect — and Turkey’s quest to join the EU — into doubt.

Turkey was made an associate EU member in 1963. Angered by Austria’s intransigence, Ankara has threatened to boycott’s Monday’s opening ceremony.

Turkish Prime Minister Recep Tayyip Erdogan said the EU should meet the challenge of opening up to Muslim Turkey.

“Either it will show political maturity and become a global power, or it will end up a Christian club,” he said.

Support for Turkey is not very high throughout the EU.

In fact, in Austria only 10% of the population favors Turkey joining the EU.

Austria was alone in the EU with its demand to rewrite the draft framework in regards to Turkey.

Austrian Foreign Minister Ursula Plassnik said her country was “listening to the people” by questioning full membership for Turkey.

“There are moments when we have to say that such fundamental things are at stake that a compromise is not possible,” she warned.

“We will not let anyone intimidate us and we do not feel isolated,” she insisted, but after a series of meetings with UK Foreign Secretary Jack Straw, it appeared she gave way.

The membership talks for Turkey are expected to last a decade, at least.

The US weighed in on the talks later today.