Samir Azzouz heads back to the slammer, but for how long this time? 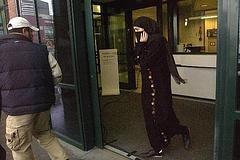 Abida Kabbaj, wife of Samir Azzouz, leaves the court after the verdict in Rotterdam, the Netherlands, Wednesday, April 6, 2005. A Dutch court acquitted teenager Samir Azzouz of plotting terrorist attacks against Dutch landmarks and ordered his release. Azzouz had been in custody since June 2004, when police found detailed maps of Parliament, the Intelligence Service, Amsterdam’s Schiphol Airport and a nuclear reactor at his home. (ABC)

Last March Samir Azzouz was tried in Dutch Court for plotting terror attacks on Dutch landmarks. He was acquitted and released for times served. Here is a little background on Samir Azzouz that you would think would have made this case a slam dunk for the prosecution:

* Azzouz had travelled to Chechnya before to join up with Islamic militants there. On top of that, the judges were presented with loads of phone taps in which Azzouz spouted Jihadi texts.
* Discs containing ‘video testaments’ which rally for the Jihad, the murder of Americans, Jews and non-Arabs
* Files explaing how a Muslim should enter the battlefield
* Document entitled ‘Advice for those who refrain from strife on the way to Allah’, encompassing an explanation of the call for Jihad and martyrhood
* A diary containing the address of a website, www.geocities.com/sluitjeaan (sluitjeaan is Dutch for ‘join up with us’, AD)
* Ammonia
* Hydrochloric acid
* One or more soldered electrical circuits
* Notes describing the chemical formula of RDX, an explosive compound
* A silencer for an automatic firearm
* Two clip holders for automatic firearms
* Night vision goggles
* A memorandum containing the address of a website, namely www.geocities.com/m_13dad, which contained a ‘Manual for preparation’ for the Jihadi ranks, illustrating the use of (amongst others) weapons and/or night vision goggles and/or silencers and/or the fabrication of such and/or guerrila warfare and/or military operations.
* Maps and/or pictures and/or drawings of several government buildings, including Parliament, nuclear power plant Borssele, the ministry of Defence, Schiphol Airport, Dutch Intelligence Agency (AIVD), Dutch Special Forces HQ
* Notes describing necessities which would be needed to carry out these (terrorist attacks, AD) crime/crimes
* Notes describing routes to these buildings and/or circumvention of the security facilities around these buildings.

But, prosecutors only asked for a 7 year prison sentence for the young Dutch Moroccan and he ended up getting acquitted on all counts. He walked!

On Friday, Dutch police arrested 6 men and 1 woman aged between 18 and 30 over an alleged plot against the intelligence service and politicians:

Militants had been plotting to attack the intelligence service’s headquarter in The Hague and members of parliament, Mr Remkes said.

The police have declined to comment on reports of gunfire during the operation, and no other details about the raids were released.

Among those held was Samir Azzouz, a Dutch teenager of Moroccan origin who had been acquitted in April of plotting attacks on Amsterdam airport, government buildings and a nuclear reactor.