Coptic Nun stabbed inside her church in Alexandria! 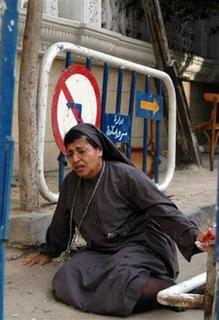 A young man stabbed a nun and a man in a church in the Egyptian city of Alexandria on Wednesday, police sources in the city said.

The man shouted “God is great” when he burst into St. George’s Coptic church in the city on Egypt’s northern coast.

Some 1,000 Muslims last week held a protest outside the church because they said it had put on a play which was offensive to Islam.

The crowd was protesting an offensive play put on at the church. 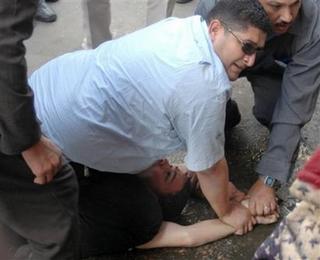 Egyptian policemen arrest a Muslim student after he stabbed and slightly wounded an Egyptian Coptic nun Wednesday, Oct.19, 2005 at the St. Gergis church in the Mediterranean port city of Alexandria, Egypt, amid tensions over a theater performance considered offensive by Muslims, a police official said. (AP)

The nun was stabbed in the lung after a prayer service:

Father Augustinous, head of the St Gergis church where the attack happened, said the assailant was aged in his early 20s and stabbed the novitiate nun in her chest with a knife as a prayer service finished.

The victim, aged in her mid-40s, was in a serious condition after undergoing surgery on her injured lung, Augustinous said.

The stabbing was in reaction over a DVD distributed at the Church:

The incident follows a protest on Friday by over 1,000 Muslims outside the church against the distribution of DVDs of the drama entitled “I Was Blind but Now I can See.”

The drama features a Christian university student who converts to Islam when a group of Muslim men promise him money. When he becomes disenchanted with his move, the men threaten him to stop him from returning to his original faith.

Coptic Christians make up about 10 percent of Egypt’s population of 70 million.

This is what one of the protesters told reporters at a demonstration against the play outside of the church last weekend (via In The Bullpen):

“It tells you how Muslims are all terrorist and how they deceive Christians to convert to Islam either by force or money,” Mahmoud said.

Freedom for Egyptians has more on the distressing news from Alexandria.

The list is so long to keep going. Extremists are blind and they do not differentiate between Muslims, Christians and Jews.

Extremists are enemies of freedom and human liberities. This is a time to find solutions not to lay blame in general statements or trade accusations. That leads to no where.