SOME SEE “RED” OVER “PINK” IN IOWA CITY!
VIDEO HERE

Former Iowa football coach, Hayden Fry, a psychology major, painted the visitor’s locker room pink because of its “calming effect”. A law professor at Iowa received death threats this week after criticizing the “calming effect” of the pink hues! 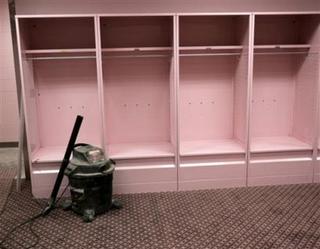 Iowa law professor receives death threats after condemning the pink motif in the visitors locker room at the University of Iowa:

Soft pink hues were added to the visiting locker room at Iowa’s Kinnick Stadium by former coach Hayden Fry in the late 1970s. Fry believed the color had a calming effect on people.

As part of a new $88 million remodeling job at the stadium, designers retained that color motif, splashing pink across the walls, carpet, showers, sinks, metal lockers and even the urinals.

The visiting law professor disagreed with the choice of color, turning calm into chaos:

The controversy gained momentum and media attention last week when a visiting law school professor told reporters she had received death threats after voicing objections on her Web site.

The Advocate has now weighed in on the controversy:

Visiting law school professor Erin Buzuvis was also a vocal critic of the locker room’s color, saying pink is associated with young girls and that its use in a football locker room is sexist and homophobic. “It is equivalent to painting the word ‘sissy’ or ‘girlie man’ all across the walls,” she said. When she voiced those opinions on her Web site, Buzuvis claims, she received death. threats

The professor later backtracked this week during a “public hearing on the issue”:

At a public hearing Tuesday, the University of Iowa adjunct law professor just wants the school to make note of what she considers “a genuine gender-equity issue” (see the video of her appearance from TV station KCRG) in the school’s NCAA recertification report.

Buzuvis created quite a stir over the weekend and early this week by calling the pink locker room sexist and homophobic. Subsequently, she received death threats and rape threats by e-mail, and now her blog has been shut down.