** HERO BUS DRIVER THREW A BAG OFF BUS BEFORE IT EXPLODED! **

The US had warned its citizens in Delhi of a possible attack. 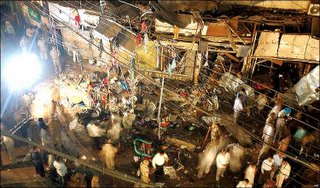 At least 55 people (local reports of up to 65) have been killed and scores wounded in a series of suspected bomb blasts in India’s capital, Delhi. (BBC)

Two near-simultaneous blasts took place in markets in central and south Delhi, crowded with people shopping ahead of religious festivals next week.

The third blast occurred in the area of Govindpuri which is in the southern part of the city.

Prime Minister Manmohan Singh blamed “terrorists” for the blasts and said he would not tolerate militant violence.

No-one has yet admitted carrying out the explosions.

Women and children were killed today in the blasts. 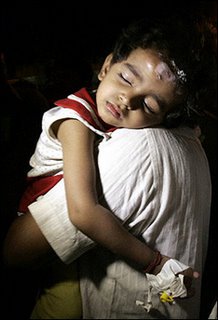 An Indian man carries his injured son to a hospital following a series of bomb blasts. Powerful explosions ripped through crowded markets in New Delhi just moments apart, killing at least 55 people in an apparently coordinated attack on the eve of a major Hindu holiday.(AFP)

US intelligence warned citizens this week of the potential of an attack:

The United States recently warned its citizens of a possible terrorist attack on U.S. interests in Delhi and elsewhere, and Indian authorities are hunting a suspected al Qaeda operative. The city’s American Embassy School canceled classes on Monday.

The first blast was reported in Paharganj, near the main railway station and an area popular with foreign backpackers. Shopkeepers cleared their carts and used them as makeshift stretchers to rush victims to hospital.

Other explosions occurred at South Delhi’s Sarojini Nagar, one of the largest markets, popular with foreigners, the rich and ordinary people, and in Govindpuri, a southern suburb. 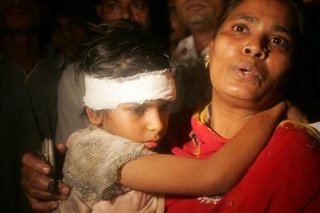 Poonam, 8, injured in a bomb explosion is carried by a neighbor after receiving treatment at the Safdarjung Hospital in New Delhi, India, Saturday, Oct. 29, 2005. A series of explosions shook the city on Saturday evening, with blasts tearing through markets jammed with shoppers ahead of an upcoming Hindu festival, officials said. At least 49 people were killed, according to officials. At least 60 people were injured in just one of the three blasts, in the Paharganj neighborhood, according to a policeman. (AP)

The terrorist bombings were the first in Delhi since 2001. The local news said as many as 65 had been killed in the blasts:

The death toll is likely to rise, Home Minister Shivraj Patil told reporters in New Delhi today. Television channels such as NDTV 24×7 have put the toll as high as 65. The home minister said at least 50 people had been injured.

The blasts left men, women and children with burns, bruises and broken limbs as they tried to escape, eyewitnesses said on television channels. Patil said he wasn’t in a position to say who was responsible for the attacks. No one has claimed responsibility for the attack.

“No condemnation is too strong for this terrorist attack,” Patil said, speaking in Hindi. “All the incidents are being investigated. The priority is to help people.”

The government will step up security to ensure that the festival season passes off peacefully, Patil said. The next of kin of those killed will be given immediate relief of 300,000 rupees ($6,650), the minister said.

The explosions are the deadliest in the Indian capital city since a suicide attack on the country’s parliament on Dec. 13, 2001, that left 12 people dead. India blamed that attack on Pakistani-backed Kashmiri separatist groups. Pakistan had denied any involvement, saying it only lends moral support to the Kashmiri freedom struggle.

At least 55 people were killed in the bombings. 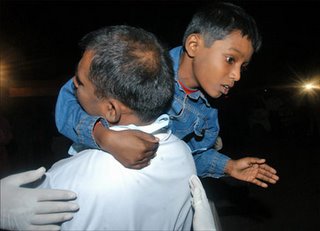 A victim of the blast at Ram Manohar Lohia hospital. (Hindustan Times)

High explosive devices, suspected to be RDX, were used in carrying out the blasts, the sources said.

Now, here is a terrific story of the Delhi bus driver hero!

Casualties were averted in a bus in the Okhla area of south Delhi due to the alertness of passengers and the driver and the conductor who threw out the bag containing the explosives before it exploded.

The bus was travelling on the Outer Mudrika route when an unidentified man entered the bus from the Kalkaji Mandir stop.

Later a passenger saw an unclaimed bag under a seat and alerted the driver Kuldeep and the conductor Budh Prakash. The driver stopped the bus and on checking he found explosives inside it.

The driver and the conductor carried the bag outside the bus and threw it away which exploded immediately on landing.

The driver and the conductor received minor injuries and are being treated at AIIMS.

As a comparison to todays bombings that has so far killed 55, on July 7th 56 were killed in the London tube bombings.

Update 2: (11:00 PM CST) The Tribune from India is saying that 60 have died and ovr 200 are inj
ured including women and children. The explosions, triggered by a remote control, are believed to have been meticulously planned and timed:

People fled in panic while the injured cried for help resulting in chaos.

While the law enforcement authorities were grappling with the twin situation, a powerful explosion ripped through a Delhi Transport Corporation (DTC) bus in South Delhi’s Gobindpuri area, killing two passengers instantaneously and injuring over 10 others.

All three explosions were triggered within minutes of one another, indicating the precise planning by the perpetrators.

Update 3: (Sunday AM) A Kashmiri islamic militant group claimed responsibility fot the blasts. Analysts said it was probably a front for a larger Pakistan-based group. The death toll has risen to 61.

Powerline had reported on the blasts this morning.
Michelle Malkin mentions the bombings.
Dogpundit has more graphic pictures.
California Conservative has more on the bombings.
Indian Blog Desipundit is shocked and outraged.