And, takes time to remember the Alabama of yesterday…

“Denise was my friend. We played together, we sang together, … we were children together,” Dr Rice said at an emotional ceremony across the road from the church.

Condoleezza Rice
A park across the street from the 16th Street Baptist Church
Birmingham, Alabama
October 22, 2005 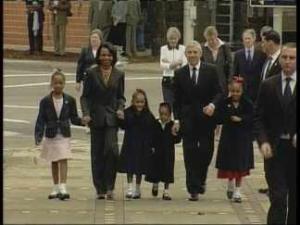 US Secretary of State Condoleezza Rice and British Secretary Jack Straw join hands with young admirers before a service to remember Condi’s childhood friend Denise McNair and three other girls who died in a church bombing in 1963. Addie Mae Collins, Denise McNair, Carole Robertson and Cynthia Wesley died on September 15, 1963 in a bombing by the Ku Klux Klan at Birmingham’s 16th Street Baptist Church.

After a parade in her honor, a speech at the University, and a Civil Rights Tribute to a childhood friend killed in a church blast, Condoleezza Rice and British Foreign Secretary Jack Straw attended the Alabama-Tennessee football game on Saturday.

Condoleezza proclaimed “The Tide of Democracy is Rolling” in her strong speech as part of the Frank A. Nix Lecture Series at the University of Alabama on Friday, October 21, 2005.

RICE AND STRAW WERE BIG HITS WITH THE ALABAMA FOOTBALL FANS!
VIDEO HERE
(This is a great video clip!)

Con dolcezza ,” in Italian, means “with sweetness,” a musical reference. According to US News and World Report Condoleezza Rice is hitting the right notes. 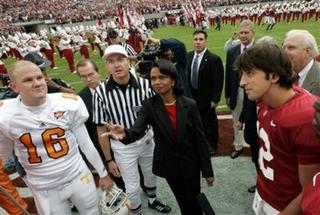 U.S. Secretary of State Condoleezza Rice, center, tosses the coin while Tennessee player Rick Clausen, left, and Alabama’s Brodie Croyle look on before the start of their game Saturday Oct. 22, 2005 at Bryant-Denny Stadium in Tuscaloosa, Ala. (AP)

Condoleezza remembers the friend she played dolls and sang in musicals with:

Forty-two years after the church bombing that killed four little girls and inflamed the civil rights movement, Secretary of State Condoleezza Rice helped honor them Saturday by recalling one of the victims as a friend with whom she played with dolls and sang in musicals.

On the second day of a trip to highlight the civil rights era as an example for countries struggling to achieve democracy, Ms. Rice and Foreign Secretary Jack Straw of Britain visited the 16th Street Baptist Church, where the bombings occurred, and watched as plaques honoring the girls were unveiled.

“As God would have it, they were at Sunday school when America experienced homegrown terrorists of the worst sort,” Ms. Rice said in an emotional ceremony at a park across the street from the church, which was bombed in 1963. In her speech, she sought to connect her childhood in the segregated South to her work as the first African-American woman to be the nation’s top diplomat.

For listeners, particularly Mr. Straw and visiting Britons, the ceremony was a reminder of how much had changed since the city of Ms. Rice’s birth was known as “Bombingham,” when it was inconceivable that someone from her tight-knit, middle-class, churchgoing community could rise to such prominence. 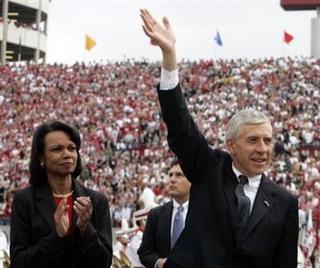 The Crimson Tide are having a terrific year and local Hero, Condoleezza Rice made room in her busy schedule to cheer on her home state team against Tennessee on Saturday!

Powerline has more on this historic weekend in Alabama and has a few strong words for the NYT reporter who doesn’t have his facts straight.

Update: (Monday AM) The BBC has a blurb about Jack and Condi today. It is a nice post and even speculates about Condi as a presidential candidate.