“The gravity of the massive shock has started to filter in. Starvation, disease, injuries, biting cold, anger, depression, breakdown of law and order and now heavy rain haunt survivors of Saturday’s devastating earthquake in which over 200, 000 people are feared dead.”

Another very busy day for America’s Secretary of State 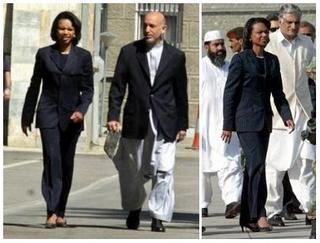 U.S. Secretary of State Condoleezza Rice arrives at Chaklala Air Base in Rawalpindi (on right) to meet with Pakistan’s President Pervez Musharraf and Prime Minister Shaukat Aziz and pledge US support to their disaster relief efforts. Condoleezza met earlier in the day with President Hamid Karzai (Left), seen here in the yard of his palace, to talk strategy on Afghanistan’s road to peace and success.

US Secretary of State, Condoleezza Rice made a surprise visit to disaster struck Pakistan to pledge support to America’s ally in this time of great suffering. Condoleezza took time away from her busy trip to Kyrgyzstan, Afghanistan, Tajikistan, and Kazakhstan to visit Islamabad and give assurances to Pakistan’s Leaders:

US Secretary of State Condoleezza Rice made a surprise visit to Pakistan, bringing US support for Washington’s wounded regional ally in the wake of the devastating South Asian earthquake.

“I do want to affirm with the Pakistani people that the international community and the US are with them in this terrible time,” she told reporters in neighbouring Afghanistan earlier in the day on Wednesday.

Rice interrupted a tour of Central Asia to make the previously unscheduled detour to the Pakistani capital Islamabad, where the government is struggling to cope with the worst natural disaster in the country’s history.

Relief workers believe they have until Friday to rescue survivors buried from the quake. Eight people were rescued on Monday including a 75 year old woman and her 57 year od daughter in a collapsed Islamabad apartment. 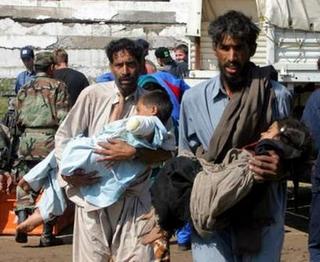 Kashmiri men carry their wounded children as they prepare to board a U.S. army helicopter and be transported to hospitals, from Muzaffarabad, the capital of Pakistan administered Kashmir October 12, 2005. Food and other relief aid flowed into more areas of northern Pakistan on Wednesday as rescue operations in the devastating Kashmir earthquake increasingly became a relief mission for those who survived. (Reuters)

On Tuesday, Rice won promises from Kyrgyzstan that U.S. forces can remain at an air base in that Central Asian nation, according to a report from The Associated Press.

“He’s alive!” rescuers shouted with joy as people gave the young rescued boy food and water and kissed him on the head. The air smelled of decomposing corpses in Balakut.

A 75-year-old woman and her 57-year-old daughter were rescued after 80 hours in the ruins of an Islamabad apartment tower.

A 75-year-old grandmother and her daughter were pulled alive from the wreckage of Margalla Towers. Pakistanis working with a British rescue team cried out “God is Great, God is Great” once it became clear Maha Bibi and her 55-year-old daughter Khalida Begum were safe. Both women were taken to a nearby hospital, where x-rays confirmed neither had suffered any broken bones. 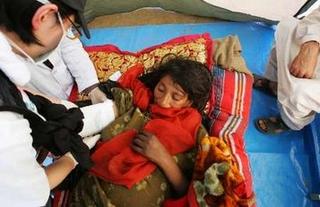 A woman is cared for by members of the Japan Disaster Relief team in Batgram, 143 miles northeast of Islamabad, October 12, 2005. Food and other relief aid flowed into more areas of northern Pakistan on Wednesday as rescue operations in the devastating Kashmir earthquake increasingly became a relief mission for those who survived. (Reuters)

“Muzaffarabad, the capital of Pakistani Kashmir, itself os considered to be much more destroyed than anticipated.”