“The Bush administration’s focus on the spread of democracy in the Middle East was both a moral obligation and a tough-minded response to global terrorism.” 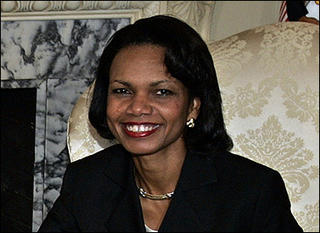 US Secretary of State Condoleezza Rice, seen here 26 September, defended the use of military force to advance the cause of democracy and liberty as ‘the only guarantee of true stability and lasting security’. (AFP)

Ladies and Gentlemen: Seventy-five years ago, when this school was founded, it was a difficult time when the world’s democracies were like islands in a raging sea. Adolph Hitler was planning his ascent to power in Germany and plotting his conquest of Europe. And Joseph Stalin was consolidating his rule and building a Soviet Union that would threaten the entire free world.

Today, however, democracies are emerging wherever and whenever the tides of oppression recede. As President Bush said in his Second Inaugural Address, “The best hope for peace in our world is the expansion of freedom in all the world.”

The ultimate collapse of the Soviet Union initiated a new moment of transformation. This was a glorious revolution, a cause for celebration throughout Russia and Eastern Europe. The Warsaw Pact countries became the new heart of NATO, and we transformed that alliance into one that Truman and Acheson would never have recognized, but would certainly have applauded. Some even thought that the engine of globalization might just make the possibility of conflict remote.

But lurking below the surface, old hatreds were gaining new power. And on a warm September morning, America encountered the darker demons of our new world.

People still differ about what the September 11th calls us to do. And in a democratic society, that debate is healthy and just and right. If you focus only on the attacks themselves and believe they were caused by 19 hijackers, supported by a network called al-Qaida, and operating from a failed state — Afghanistan — then our response can be limited. The course of action presumes that we are still living in an ordinary time.

But if you believe, as I do and as President Bush does, that the root cause of September 11th was the violent expression of a global extremist ideology, an ideology rooted in the oppression and despair of the modern Middle East, then we must speak to remove the source of this terror by transforming that troubled region. If you believe as we do, then it cannot be denied that we are standing at an extraordinary moment in history.

Some would argue that this broad approach to the problem is making the world less stable by rocking the boat and wrecking the status quo. But this presumes the existence of a stable status quo that does not threaten global security. This is not the case. A regional order that produced an ideology of hatred so savage as the one we now confront is not serving any civilized interest.

For 60 years, we often thought that we could achieve stability without liberty in the Middle East. And ultimately, we got neither. Now, we must recognize, as we do in every other region of the world, that liberty and democracy are the only guarantees of true stability and lasting security.

There are those who worry that greater freedom of choice in the Middle East will only liberate and empower extremism. In fact, the opposite is true: A political culture of transparency and openness is not one in which extremist beliefs can ultimately thrive. Extremism is most dangerous when it lurks in the dark and hides underground. When there is no political space for individuals to advance their interests and redress their grievances, then they retreat into the shadows to grow ever more radical and divorced from reality. We saw the result of that on September 11th and now we must work to advance democratic reform throughout the greater Middle East.

Now, to support democratic aspirations, we must be serious about the universal appeal of certain basic rights. When given a truly free choice, human beings will choose liberty over oppression; the right to own property over random search and seizure. Human beings will choose the natural right to life over the constant fear of death. And human beings will choose to be ruled by the consent of the governed, not by the coercion of the state; by the rule of law, not the whim of rulers. These principles should be the source of justice in every society and the basis for peace between all states.

You can read the rest HERE.

TigerHawk attended the talk last night at the Princeton Jadwin Gymnasium and wrote this analysis afterward from the local Starbucks.

Instapundit notes the “bloggers verses the media” accounts of the address.