Trial postponed as witnesses do not show up for the defense! 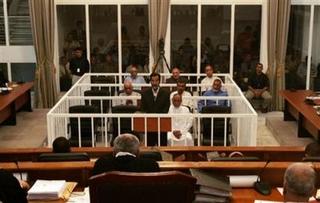 Saddam and 8 of his henchmen plead “Not Guilty” to charges of ordering the killing of 148 Shia men in 1982:

After just over three hours, the trial was adjourned until 28 November.

Saddam Hussein’s defence team had said they wanted a postponement to prepare their case, but Reuters news agency quoted the chief judge as saying the main reason was witnesses had not shown up.

The trial began in an imposing marble building that once served as the National Command Headquarters of Saddam Hussein’s Baath Party, in the heavily fortified Green Zone in the Iraqi capital.

Amid some verbal sparring with the judge, the former Iraqi leader stated: “I preserve my constitutional rights as the president of Iraq. I do not recognise the body that has authorised you and I don’t recognise this aggression.

“What is based on injustice is unjust … I do not respond to this so-called court, with all due respect.”

In Dujail, a few demonstrators gathered in the main square chanting: “Saddam Hussein should be executed, him and his whole family.”

In Dujail, Iraq those who were murdered by Saddam were remembered today. 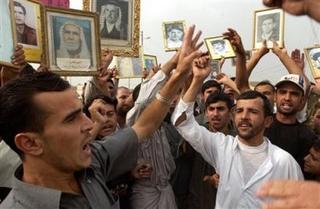 Iraqis hold pictures of those killed during Saddam Hussein’s regime during a demonstration demanding his execution in Dujail, Iraq, Wednesday Oct. 19, 2005. Saddam and seven senior members of his regime are facing charges that they ordered the killing in 1982 of nearly 150 people in the mainly Shiite village of Dujail north of Baghdad after a failed attempt on the former dictator’s life. (AP)

You cannot miss Iraq the Model today. Mohammed gives a glimpse inside Iraq at the thoughts and feelings of Iraqis on this tyrant’s trial today.