Update: Suicide bombers were behind the coordinated attacks!

AMATEURS HAVE THE FIRST PICTURES FROM THE CATASTROPHE,
VIDEO HERE

ONCE AGAIN, BOMB BLASTS ON BALI ON A BUSY SATURDAY NIGHT,
VIDEO HERE

At least four foreigners, including one Australian, were reported to be among the dead by different sources. 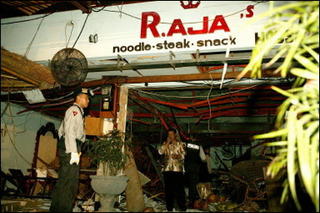 Indonesian security personnel survey the scene at a bomb damaged restaurant in Kuta, on the island of Bali. A series of near-simultanous bomb blasts ripped through popular tourist spots on the Indonesian island of Bali, killing at least 23 people including several foreign tourists. (AFP)

The attacks came just 11 days before the third anniversary of the bomb attacks on two nightclubs in Kuta which left 202 people dead. The bombings were blamed on the Al-Qaeda-linked Jemaah Islamiyah Islamic militant group.

A French diplomat who had visited two hospitals in Bali said at least 23 people had been confirmed dead after the latest attacks, which came during the peak tourist season.

An eyewitness who arrived at the scene in Jimbaran minutes after the explosion said he saw at least eight bodies, including four foreigners. “There are also lots of body parts,” Bagas Saputra told ElShinta radio.

In Kuta local resident Dewa Manik said he heard two blasts coming from Raja, a road-side restaurant popular with locals and foreigners. Shattered glass littered bloodied streets around the Matahari Square shopping center which had been packed with hundreds of people when the blast went off.

British tourist Daniel Martin told the BBC he was standing in a building next to the restaurant in Kuta when a “tremendous” explosion erupted.

“It was just sheer chaos with no one really taking control,” Martin said, adding that “there were no police or anyone else around for a good while. It was everyone pitching in to help the wounded.

“There were people lying in the street with serious wounds, blood pouring into the street … I was afraid to go into the actual restaraunt for fear of what I might see in there.” 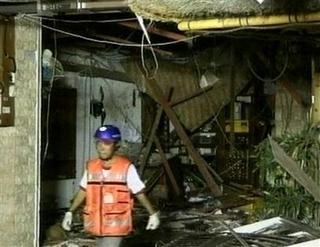 Scene in Kuta after bombs went off almost simultaneously Saturday Oct. 1 2005 in two tourist areas of the Indonesian resort island of Bali, killing at least eight people and wounding 13 others, police and hospital officials said. Foreign tourists were among the victims. The blasts at Jimbaran beach and the restaurant in a bustling outdoor shopping district in downtown Kuta ‘were clearly the work of terrorists,’ Maj. Gen. Police Ansyaad Mbai, a top Indonesian anti-terrorism official, told The Associated Press. (AP)

The tourist area of Bali has been hit again with multiple bomb blasts:

A receptionist at the Graha Asih Hospital close to Jimbaran Bay said at least eight bodies were in the morgue, and doctors were treating at least 13 other people. 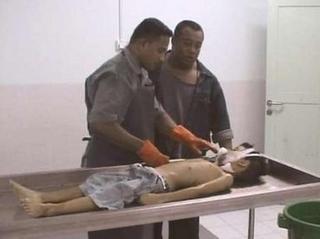 Medical staff examine the body of a young victim in a hospital in Denpasar after bomb blasts today on the Indonesian resort island of Bali October 1, 2005. (Reuters)

Officials at Sanglah Hospital, near Bali’s capital of Denpasar, said 25 people were killed and 101 others were being treated at six hospitals.

So far, no one has claimed responsibility for the blasts on this resort island.

Update: Alenda Lux has more on the bombings.