One person said he felt his house shake a mile from the blast. 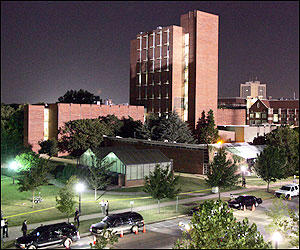 Police cordoned off an area around the George Lynn Cross Hall, Botony, Microbiology building on the OU campus. (SI)

During the football game yesterday an apparent suicide bomber blew himself up near the stadium:

Police are investigating an explosion at the University of Oklahoma late Saturday afternoon that killed one person.

Authorities suspect it may have been a suicide. Campus police say the body was found outside the university’s botany-microbiology building on the west side of the Oklahoma Memorial Stadium. A game was under way at the time.

The university’s president says the blast could be heard by some in the crowd of 84-thousand, but that no one inside the stadium was ever in danger. 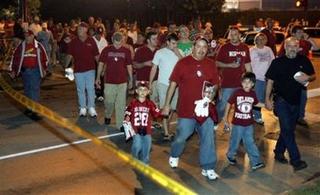 Football fans walk past police perimeter tape after one person was killed in an explosion in a traffic circle about 100 yards from a packed football stadium at the University of Oklahoma on Saturday night, Oct. 1, 2005. (AP)

Sports Illustrated has more on the bombing:

There were no other reports of injuries. There was no word on the identity or sex of the person who died.

The loud noise of the explosion could be heard clearly inside Oklahoma Memorial Stadium, where 84,000 people were watching the Oklahoma Sooners play Kansas State.

A police bomb squad detonated explosives found at the site of the blast. The detonation could also be heard in the stadium area. The area near the stadium was searched by bomb dogs.

“At no time was anyone in the stadium in danger,” Boren said.

Kerry Pettingill, Oklahoma homeland security director, said the incident was under criminal investigation and the motive behind the explosion was not known.

As fans streamed out of the stadium after the game, they were routed around the crime scene. Some fans leaving the stadium were escorted by police to buses that were parked near where the explosion occurred.

Students who saw the explosion aftermath said it smoked like a grill!

OU police Sgt. Gary Robinson said the body had not been removed as of late Saturday night as a bomb team continued to check the area for possible explosives before detectives could move in for their investigation.

Jaclyn Hull, an OU freshman, said she was leaving the game shortly before the explosion.

“We saw a little bit of smoke, about as much as you would see coming up from a grill,” she said.

Last week another University of Oklahoma student pleaded guilty for carrying a pipe bomb in his backpack at the airport!

On September 26, 2005 an University of Oklahoma student pleaded guilty to bringing an explosive device to the airport. In August he was arrested after police found an improvised pipe bomb in his backpack. He told officials he had forgotten the device was in his bag. He faces up to a year in prison and up to $100,000 for the charge.

Update: Michelle Malkin has updates on the investigation from Oklahoma.

Glenn Reynolds, hot off of CNN, and Powerline are carrying the story. So is Charles at LGF.

Update 2: THIS is frightening!

Logic dictates that two “devices” suggest that two people were involved. A terrorist cell? Why would someone committing suicide using a large bomb to kill themselves just keep another bombing laying around? You know, just in case the first one didn’t click off? It’s all premeditated in the first place. That means conspiracy to kill at least themselves if not someone else in the process. But then there’s that whole “large bomb” thing we’re left to contend with? Why would someone use such a large “device” to take himself or herself out if they were not targeting others to go with them? And when I say a “large bomb” that’s exactly what I mean.

My family and I were sitting at home, roughly one mile away from the stadium as a bird flies, when we heard and felt an earth shattering explosion. I was monitoring my hand held amateur radio when the local repeater erupted with chatter about a explosion. It was so loud that people wanted to know if others had heard it. I called the Police who advised me that officers were on the scene and that a explosion had occurred but they would not give any other details. Our house literally shook. The ground vibrated with a deep rolling growling sound. This was a large explosion. Not some mere Pipe bomb put together by a pissed off student.

Update 3: The bomber has been identified:

A University of Oklahoma student was identified Sunday as the person who was killed in an explosion near a packed football stadium, authorities said Sunday.

The body is believed to be that of Joel Henry Hinrichs III, 21, according to a news release from Salvador Hernandez, special agent in charge of the FBI in Oklahoma. A student telephone book lists Hinrichs with a permanent address in Colorado Springs, Colo.

Joel Hinrichs was a Triangle fraternity member and a junior in the engineering department. Michelle Malkin is linking to information HERE including a picture of Hinrichs.

Triangle Fraternity has a statement out on their website.

Update 4: (Monday 12:15 CST) Powerline is reporting that one source is saying that they found Islamic literature in his apartment. i do not know the accuracy of this claim.