When you put aside the grim milestones and death counts which are tragic yet less than half of what Iraqis were used to under Saddam Hussein, the country is making tremendous strides in governance and rebuilding efforts. 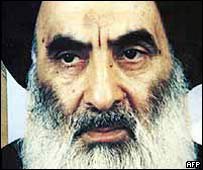 The Ayatollah Sistani again today placed his own power and pride aside for the good of the Iraqi people. He proves to be a true friend and a rational religious leader for the Iraqi Shia. Not only do his decisions help his own Shiite community but help bring stability to this divided country. When books look back on this historic period in Iraqi history, Sistani will stand out as one of the central figures in shaping this country into a working democracy.

The grand Ayatollah wants Iraqis to vote according to their beliefs, Sheikh Abdul Mahdi al-Karbalai said in a sermon on Friday.

The Ayatollah’s statement may worry the ruling Shia-led coalition, the United Iraqi Alliance.

His support before the January election helped them win over many Iraqi Shia.

Delivering a Friday sermon in the holy city of Karbala, Sheikh Karbalai revealed that Grand Ayatollah Ali Sistani, a marja, or source of emulation for his followers, would not back any party.

“The marja enjoins Iraqis to participate massively in the forthcoming elections, but does not support any political group in particular,” he said.

“It’s up to Iraqis to make their choice based on their beliefs.”

He also questioned the motives of those who did not vote in the constitutional referendum on 15 October. The turnout among Iraqi Shias was lower than expected.

“We say to those who did not vote in the referendum on the constitution: What have they gained? How can they consider themselves Shias and not obey their religious leaders?”

The following is a headline and article in the Iraqi Arab newspaper “Al-Mendhar” of October 27, 2005. 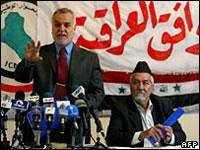 Three Iraqi Sunni parties have announced the formation of an alliance to contest upcoming legislative elections in December.

The announcement on Tuesday that the constitution was approved cleared the way for the polls to elect a new Iraqi National Assembly.

The parties urged Iraqis to take part in the polls and to reject any calls for a boycott.

The three parties hope to increase Sunni representation in a national assembly that is currently dominated by Shia Arab and Kurdish parties.

“The leaders of the following political blocs, the Iraqi Peoples Gathering, the Iraqi Islamic Party and the Iraqi National Dialogue, have agreed to run on one list under the name Iraqi Accord Front,” a joint statement said.

In all, 78% of voters backed the constitution and 21% opposed it in the vote on 15 October, electoral commission officials announced on Tuesday.

The result paves the way for elections for a new four-year national assembly to be held by 15 December 2005, formally ending Iraq’s period of transitional government.

Sunni figures talked of widespread fraud after hearing the final results, but the UN commended the poll.

“No” campaigners had hoped to block it by taking two-thirds of the vote in at least three provinces, but only succeeded in two.

Sunni leaders fear the constitution may split Iraq, with a Kurdish north and Shia south, depriving Sunni Arabs of access to the country’s oil resources.

However, one of the three Sunni parties forming the Iraqi Accord Front had backed the charter.

The Iraqi Islamic Party encouraged Sunnis to approve the constitution after Shia and Kurdish political leaders agreed to consider further revisions after the elections in December.

The party’s secretary general, Tarik al-Hashimi, told Qatari Al-Jazeera television that its support for the constitution did not mean it would accept the “attempt to distort the results of the voting in any Iraqi governorate”.

Mr Hashimi was also troubled by the disparities between provinces where Sunni Arabs were the majority, and those where Shias and Kurds dominate.

“The split among the Iraqis on the draft constitution is very clear and this portends serious signs concerning a fateful issue over which no people in the world have been as divided as this,” he said.

Sunni Arabs in Iraq are joining the political process. This is indeed encouraging. They are using strong words and language instead of turning to guns and bombs. They realize to gain power they must get votes, to get votes they must organize and participate. They have learned this from the results of the January election. A short 10 months and democracy is budding in the Sunni Arab mind in Iraq. This is a tremendous development and a large leap towards inclusive democracy stability & security in Iraq.

I wonder what kind of coverage this watershed announcement will get?

* More than 100,000 Iraqis nationwide participated in The Constitutional
Awareness Program.

* The Constitutional Awareness Program conducted its final round of town hall meetings. 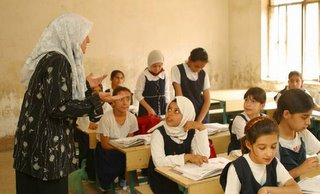 * Accelerated Learning Program (ALP) classes, to eventually reach 11,000 students this year, began earlier this week in campuses across the country.
– ALP schools are helping out-of-school youths ages 12-18 return to
class, completing two years of primary education in one year. These schools are located in the 10 governorates with the lowest primary school net enrollment rates. Due to enthusiasm for the program, more students than anticipated will be participating and additional classrooms have been opened. This is the first year of ALP classes, following on the successful pilot program of 2003-2004.
– A total of 1,000 trained teachers will staff
the ALP schools country-wide. For the past year, USAID has supported a cascade-style training program to ensure that these instructors can help students learn quickly and effectively. Workshops and sessions for master trainers continue to take place in Amman and each of the participating governorates.

* The first issue of the Mesopotamia Journal of Agriculture in over five years was recently published with assistance from the HEAD program.
– The issue contains 20 papers in Arabic and English reporting original research in the fields of Soil Science, Animal Production, Forestry, Field Crops, Agricultural Engineering, and Plant Protection. After long years of isolation from the international scientific community, the publication of this issue marks a significant step toward the advancement and international recognition of regional research and graduate programs in all areas of agriculture in Iraq. Future editions of the journal are already being prepared with editions to be produced monthly.

* Baghdad: Completed expansion and rehabilitation of one water treatment plant and continues constructing another to increase capacity by approximately 110 million gallons per day; rehabilitating sewage treatmentplants.
− A major wastewater treatment plant in Baghdad began operating in June 2004; this is the first major sewage plant in the country to operate in over 12 years.
− The sewage treatment system in Baghdad, barely functioning for years before the conflict, will be restored to almost 100 percent capacity, serving 80 percent
of BaghdadÂs population.
− Standby generators are being installed at 41 Baghdad water facilities.
– Over 15,650 houses have recently been connected to the Baghdad Water Distribution System.

Since the cessation of the 2003 conflict, USAID has completed its planned work at Umm Qasr Seaport, restored significant portions of IraqÂs telecommunications network, rebuilt three major bridges and restored the rail line connecting Umm Qasr with Basra city and points north. USAID also helped avert a humanitarian crisis during the conflict by providing assistance to the United Nations World Food Program. USAID advisors continue to assist with management and distribution of food rations to Iraqi citizens.

This information and much, much more is available at USAID and was provided by Haider Ajina.

Omar at Iraq the Model has some great news of his own on the formation of an Iraqi Rights Group.