As Charles Johnson pointed out, yesterday was a day of “grim milestones” and biased reporting.

I thought at first it might be a sympathetic look at the sacrifices of our American forces in Iraq. Nope!

That is asking too much from the editorialists at the AP.

Thomas Wagner comes out with another scathing attack on the US and our military today in what is quite possibly another planned attack against our country and troops in the War in Iraq. Articles like this make you wonder if they were just sitting on the back burner waiting for that “grim milestone” of 2,000 US Iraqi deaths to hit. 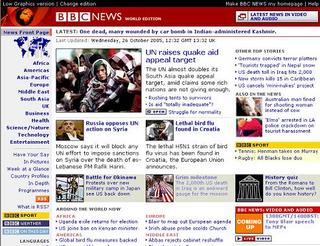 Even the BBC got in on the “Grim Milestone” action.

The first line of the AP editorial disguised as news is sympathetic:

“Some Iraqis sympathized with U.S. forces on Wednesday after hearing the American death toll in the Iraq war had reached 2,000.”

The rest is a piece of biased crap working to sway the hearts and minds of Americans against a just and heroic effort to rid the world of a ruthless dictator, free the Iraqi people, help set up a democracy in this troubled land and make the world safe from terrorism. Here are a few of the better lines from the AP editorial disguised as news:

A day after the “somber milestone” was reached, insurgent attacks continued. Four militants hiding behind a mosque shot and killed a government official as he drove to work Wednesday, and an Internet statement claimed Al-Qaida in Iraq has abducted two Moroccan embassy employees.

The milestone came amid growing doubts among the U.S. public about the Iraq conflict, launched in March 2003 to destroy Saddam Hussein’s alleged weapons of mass destruction. None was ever found…

…Some Iraqis complained that the attention was misguided because far more Iraqis have died in the conflict than Americans. No one knows an exact number of Iraqi deaths, but there is some consensus — including from a U.S. military spokesman and outside experts — that an independent count of roughly 30,000 is a relatively credible tally of Iraqi civilian deaths.

“I hope the number of Americans who die goes even higher,” said Omar Ahmed, 36, the Sunni Arab owner of an electricity shop in Dora, one of the most violent parts of Baghdad.

Nearby, Ali al-Obeidi, a 28-year-old Sunni Arab, said he hoped the U.S. losses would prompt the United States to leave Iraq.

“It makes me happy,” he said about the grim 2,000 dead soldiers milestone. “They’re an occupation force.”

Al-Obeidi said the number pales in comparison to the thousands of dead Iraqis. “The Iraqis are my brothers. We saw nothing good from the Americans. They hurt us and their presence in Iraq is to blame for all the Iraqi deaths.”

This article again begs the question, “If our media wanted us to lose in Iraq what would they be doing differently with their reporting than they do today?” It makes you wonder. 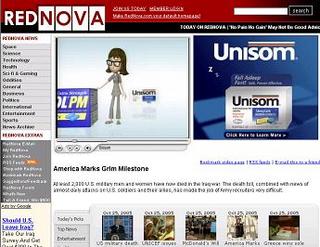 Not to be outdone by the BBC, Reuters also has their “Grim Milestone” reminder up today.

REUTERS EVEN MADE A GRIM MILESTONE VIDEO CLIP!
HERE

The most outrageous bit from the AP’s biased story is that the reporter, Thomas Wagner, now openly uses the biased Anti-War group’s (Iraq Body Count) number of Iraqi casualties. Wagner even calls this a “research group”! Ha! This number includes homicides and terrorists who lost their lives in attacks on innocent civilians but Wagner does not think this is worth mentioning.

The AP also does not mention that the massive death rate in Iraq is equal to the murder rate in New Orleans (in 2004). That is also not worth mentioning.

Free Belarus knows something about commitment and sacrifice and has some words of advice for the mainstream media.