The Egyptian liberals and the American conservatives 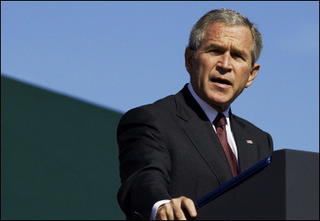 US President George W. Bush said that help was on the way to victims of the ‘horrible tragedy’ in South Asia, where thousands were killed after a massive earthquake devastated parts of Pakistan, India and Afghanistan. (AFP)

A few questions came to mind while reading this great posting:

* What happened to American Liberals?
* If American Conservatives stand as Freedom Fighters what do the liberals stand for today?
* How can a person say he or she believes in freedom and democracy but is unwilling to sacrifice?
* What is the American liberal strategy to freeing people enslaved in a brutal regime?
* How can one say they are for Human Rights and yet turn their back as mass graves are being filled to overflowing?
* How can one who believes in Human Rights equate dismemberment to hazing techniques?

And, to my Egyptian friends…

Please name one international leader who consistently stated that their were no weapons of mass destruction in Iraq “before” the War in Iraq began. Just one… (and Saddam Hussein does not count!)
* What are you being told about America that would have you not trust American intentions today?
* Does anyone give America credit for the great sacrifice in life and money that our country is giving Iraq and the region today?
* Why is there not greater outrage in the Middle East against the killers of innocent Iraqis?

Oh,… a terrific post by the way. And, yes, there are many here in the US that agree with your assessments. Even though it continues to be a rocky road, American Conservatives are not just shaping things for the better in the US but also in the world at large, it appears.

Those who are willing to back Freedom will Always Have a Place at this Table.