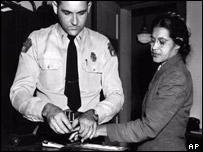 Rosa Lee Parks, whose refusal to give up her bus seat to a white man sparked the modern civil rights movement, died Monday. She was 92.

“One December evening, a woman left work and boarded a bus for home. She was tired; her feet ached. But this was Montgomery, Ala., in 1955, and as the bus became crowded, the woman, a black woman, was ordered to give up her seat to a white passenger. When she remained seated, that simple decision eventually led to the disintegration of institutionalized segregation in the South, ushering in a new era of the civil rights movement.”

And that is how Rosa Parks changed the country and the world, by a simple act of courage.

Reactions on her death:

“Rosa Parks has shown the awesome power of right over might in history’s long journey for peace and freedom.” — Rev. Jesse Jackson.

“I think Rosa Parks was truly a historic figure who singularly on December 1, 1955, tore down the walls of American segregation and apartheid. One of the highlights of my life was meeting and getting to know her … a gentle woman whose single act changed the most powerful nation in the world.” — Rev. Al Sharpton.

I give the Left no longer than 24 hours for someone to start the Bush Bash over this great woman’s death. No longer… And, then I predict that the flood gates of Bush Bash will be drawn fully open.