All Quiet from The Quagmire

Listen carefully! Do you hear that?
** crickets chirping **

This past week we heard no comforting words of “occupation” from Cindy Sheehan (although she is planning more civil disobedience and Thanksgiving turkey in Crawford, Texas!), no Teddy Kennedy attacks on the US troops in Iraq, and word is out that Al Zarqawi may be focusing attention elsewhere.

The only coffins displayed this week were those of the victims from the 1983 Kurdish Barzani Tribe Massacre. 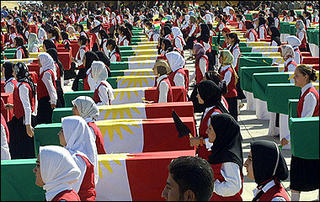 The only sounds coming from Iraq this week were the sounds of ballots being emptied on the table to be counted and then recounted, and the shuffling noise of paper.

The election in Iraq was another great success! Maybe you don’t feel this from the media reports you’ve seen… or have not seen!

“Iraq the Quagmire” is maturing into “The MidEast Democracy Leader”! The strongest proof of this it that even the Arab League is backtracking from its previous stand. This group of power-brokers knows how to smell out a winner and has now decided to lead the push for Iraqi reconciliation:

After speaking with the revered senior Shiite cleric in this holy city south of Baghdad, Mussa said: “I obtained the blessing and support of Ayatollah Sistani, which made me glad.”

It was an unprecedented meeting between an Arab League chief and the top Shiite religious figure in Iraq, and came three days after former dictator Saddam Hussein went on trial for crimes against humanity.

The Arab League must be absolutely resolved to success of the New Iraq. How else to you explain this? The representatives even made an historic visit to Kurdistan today:

Arab League chief Amr Moussa called for a new Iraq as he addressed the Kurdish parliament during a landmark visit aimed at drumming up support for a national reconciliation conference.

“I hope Iraq will change, that we will see another Iraq where Iraqis from all walks of life live together in peace and love,” he told MPs on Sunday at parliament, who greeted his speech with applause and a standing ovation.

The head of the 22-member Arab League arrived on Saturday to meet regional president Masud Barzani in a highly symbolic visit that marked Arab League recognition of the Kurdish autonomous region.

The election results are due out tomorrow. We have already heard in passing that one of the Iraqi provinces turned it down. Yet, before the election, the western media was giddy that only three provinces had to turn it down to stall the democratic process. That didn’t happen. And, even though there were concerns of fraud, that didn’t happen either.

Michael Yon has his own version on quiet in his Weekly Standard piece today:

“All Quiet on the Baghdad Front”

Update: (Monday AM) For more on that anonymous Telegraph poll from the anonymous commenter below go HERE.

Update 2: (Monday AM) Glenn Reynolds offer more upbeat news on oil output and the “Not so Sunni day for leftists”.