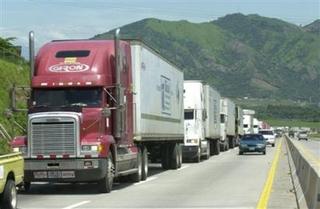 Truck drivers line up on the highway as a protest against high diesel prices in San Salvador, El Salvador, Wednesday, Sept. 14, 2005. (AP) 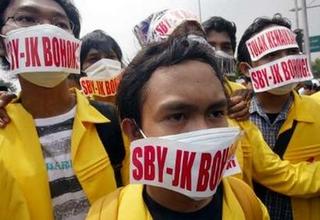 Student protesters wearing a mask with a sign reading ‘SBY-JK BOHONG (President Susilo Bambang Yudhoyono and vice president Jusuf Kalla lying)’ marched to the presidential palace during a protest in Jakarta September 9, 2005. Former Indonesian president Abdurrahman Wahid and hundreds of students protested against the government’s intention to raise fuel prices in the coming months, which they said would hurt the poor. Indonesia may bring domestic fuel prices in line with world market levels in one year’s time but expensive and politically sensitive subsidies are likely to be lifted only gradually, a government minister said on Thursday, September 8. (Reuters)

Gas prices were making headlines in Indonesia back when it was $58 a barrel. Today the price is at $70 a barrel, and Indonesia, southeast Asia’s largest economy, is feeling the effects. 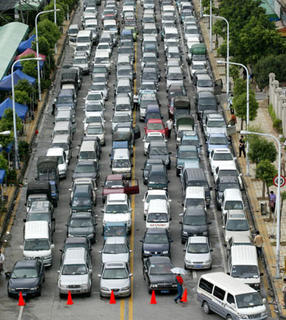 China the world’s second largest energy consumer is facing its own gas crisis as motorists line up in southern Guangdong province. 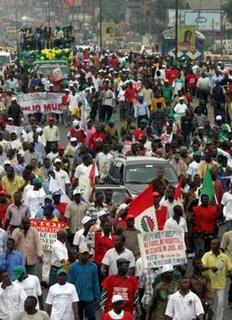 Nigerian labor union activists march through the commercial capital Lagos on September 14, 2005. Nigerian labour union activists marched through the commercial capital Lagos on Wednesday to protest against a 30 percent rise in the price of fuel that they say further burdens tens of millions of poor Nigerians. The Nigerian Labour Congress (NLC) had billed the march as the first in a series of mass protests that would also highlight what it sees as President Olusegun Obasanjo’s failure to improve services to the poor majority in six years in power. (Reuters)

The rally in Lagos was the first in what unions say will be a series of protests over two weeks throughout Nigeria, Africa’s most populous nation of around 130 million people and the world’s eighth largest oil exporter.

Nigerian labor unions say it is unfair for citizens to pay more for fuel in an oil-rich nation. Nigeria, though, has relied on massive fuel imports to meet domestic demand while state-owned refineries hit by corruption under previous governments have been producing well under capacity. Periodic hikes have nearly tripled fuel prices in the six years of Obasanjo’s rule. 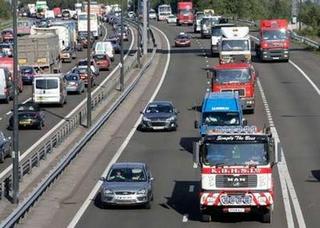 Fuel protesters drive along the M4 motorway in South Wales to demonstrate against high petrol and diesel prices September 16, 2005. A convoy of around 100 vehicles took part in the protest on Friday which came on the day that three retailers announced a cut in pump prices. (Reuters) 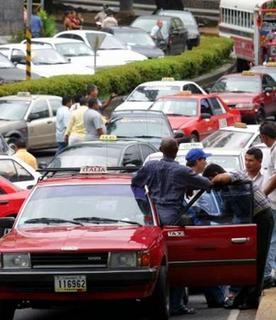 Taxi drivers protest on a road in Panama City, Panama September 15, 2005. The drivers are asking the government to help lower gasoline prices. (Reuters) 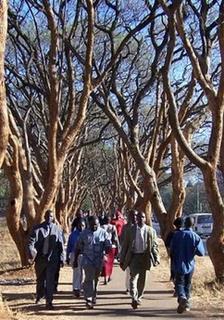 Zimbabwe’s Opposition Leader, Morgan Tsvangirai, led an opposition march into Harare to protest the miserable fuel crisis in the country:

“I’m walking to work,” the leader of the Movement for Democratic Change said as he left his home in the suburbs of Strathaven, about six kilometres from the city centre.

“I’m walking in solidarity with the people of Zimbabwe – enough is enough,” he added.

Dressed in a light blue shirt and grey trousers, Tsvangirai was accompanied by a handful of aides.

Zimbabwe is in the grips of its worst ever fuel crisis and many fuel stations have not received deliveries for weeks.

Controversial President Robert Mugabe’s economic policies have led the “Bread Basket of Africa” to the brink of collapse and starvation. Zimbabwe is finding itself short on food, gas, homes, blood…!

Opposition members in Zimbabwe are often times harassed, jailed, and/or tortured by the Mugabe Regime. Morgan Tsvangirai led the Opposition Party during the election earlier this year where Mugabe retained his grip on power in the country. Many believe the election was rigged.