There he was. Man, he still had it! In that crisp blue cotton shirt with a striped red tie. His baby blues as piercing as ever. And the snappy red suspenders pulled the ensemble together like a Martha Stewart bathroom. Dan was back!

Dan Rather was interviewed by Larry King on Tuesday night.

As Hurricane Rita approaches, officials are working feverishly to locate Houston-based Lucy Ramirez, to warn her of the looming disaster. 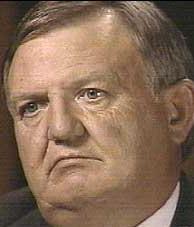 Sadly, Dan Rather was not with the majority.

The man CBS News touted as the “unimpeachable source” of explosive documents about President Bush’s National Guard service turns out to be a former Guard officer with a history of self-described mental problems who has denounced Bush as a liar with “demonic personality shortcomings.”

Over the past three years, retired Lt. Col. Bill Burkett has given dozens of newspaper and television interviews accusing the president and his aides of destroying documents and stealing elections. In e-mail messages to an Internet chat group for Texas Democrats, he has also said that the “Bush team” sent “goons” to intimidate him at his ranch in Baird, Tex.

Dan, has since retired from his many years of peddling the information that shaped the nation. But, he was back this week. And, he was in rare form as he blasted the new order of journalism.

Addressing the Fordham University School of Law in Manhattan, occasionally forcing back tears, he said that in the intervening years, politicians “of every persuasion” had gotten better at applying pressure on the conglomerates that own the broadcast networks. He called it a “new journalism order.”

Even in the documentary world, there’s a certain kind of intimidation brought to bear these days, particularly from the religious right.

“If you made a movie about (evolutionary biologist Charles) Darwin now, it would be revolutionary,” Nevins said. “If we did a documentary on Darwin, I’d get a thousand hate e-mails.”

Rather praised the coverage of Hurricane Katrina by the new generation of TV journalists and acknowledged that he would have liked to have reported from the Gulf Coast. “Covering hurricanes is something I know something about,” he said.

“It’s been one of television news’ finest moments,” Rather said of the Katrina coverage. He likened it to the coverage of President Kennedy’s assassination in 1963.

“They were willing to speak truth to power,” Rather said of the coverage.

Tonight Dan was back on “Larry King” congratulating CNN and Anderson Cooper for their excellent coverage of Hurricane Katrina. It is that same type of coverage that has seen CNN lose viewers consistently for several quarters, now. But, Dan didn’t care. Cooper was brilliant!

And, all of this reminds us that it has been a year since Bill Burkett made this startling confession after the Rathergate Scandal busted into the mainstream consciousness:

Burkett now maintains that the source of the papers was Lucy Ramirez, who he says phoned him from Houston in March to offer the documents. USA TODAY has been unable to locate Ramirez.

When Burkett gave copies of the documents to USA TODAY, it was on the understanding that his identity would not be disclosed. USA TODAY honored that agreement until Burkett waived his confidentiality Monday.

It has been over a year since anyone has heard from Lucy Ramirez from Houston. As Hurricane Rita builds in the east, we can only hope and pray that Lucy Ramirez is warned in plenty of time to escape the area to safety. Today our thoughts are with you, Lucy Ramirez. May you be spared from Rita’s fury!