Well, the Jew-hater just got off stage on CSPAN. (I thought this was an Anti-Iraq War Rally? Hmm…)

Alexis Deveaux is reading her poetry, now. “Even the fish will chant, beware of the chickens who come home to roost (?)…”

Gloria la Riva the Leader of the “Cuban 5” Freedom Movement is now celebrating the Atlanta Court’s reversal of their sentences because there was too much Anti-Castro bias in Florida where they were sentenced.

(Man, you could have made a killing selling those Palestinian scarves!)

A woman was on stage a bit ago talking about her meeting with Hugo Chavez in New York City last week and what a rush that was.

Next Arab speaker is from the National Council of Arab Americans (check out the link I’ve added and look whose book they are promoting!) says he lives in a society of fear, blah, blah,…

I thought this was going to be an Anti-Iraq War Rally but it’s just a hodgepodge of extreme leftist groups taking turns at a microphone.

The media promised the largest anti-war protests since the war began. I believe they’re off by several thousand by the looks of things on CSPAN. 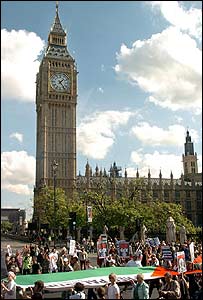 The Londoners were out today as well. I think Big Ben has seen Bigger Protests.

I guess, my favorite in that lineup would have to be Ramsey Clark. He’s back home now in the states since he got canned from Saddam Hussein’s Defense Team. They obviously weren’t as impressed with Ramsey after they worked with him for a while. The word on the street was that the American’s representing Saddam were “too controlling!”

Ramsey Clark is back in the states after getting canned from his last gig as a lawyer representing Saddam Hussein.

The fiercely anti-war (Anti-American) Clark has met with Saddam several times over the past 15 years and was considered a friend of Saddam’s Iraq when it was hit by sanctions in 1990 for invading Kuwait.

…An embittered casualty of the ’60s, and Attorney General for the LBJ administration, Clark assumed a leftist posture after leaving the Justice Department. He became the lawyer for anti-war protestor Philip Berrigan, headed a private probe into the FBI killings of Black Panthers Fred Hampton and Mark Clark, and travelled to Vietnam to condemn the bombing.

In June 1980, with America mesmerized by the Iran hostage crisis, he joined a forum on “Crimes of America” in Tehran–the first of many such junkets. The ’80s saw him globetrotting to schmooze with any dictator who happened to be on the White House shit-list…

He has advised, among others, David Koresh, the leader of the Branch Davidian religious sect who died with 75 followers when U.S. federal agents stormed their compound in Waco, Texas in 1993.

I hope some Republican is taping this fiasco somewhere. They could save some money, skip their convention in ’08, and just show replays from this event today!

Update: I do hope the transcript for this rally is made available. Another Pro-Chavez, Pro-Palestinian, Anti-Israeli protester just left the stage. For the media to say that this is an Anti-War Rally is quite a stretch. Now they are chanting, “End the Occupation!” It is Huge Anti-American Leftist Rally! The media should be sued for misrepresentation. This is MUCH MORE than an Anti-War Rally!

Larry Holmes is speaking to about 30 people on a stage somewhere (oh, my word! That stage is the one on the National Mall!). All the cameras show are empty tents and about 20 people standing around. He just called out to the 30 people for a nation-wide strike! The ANSWER protest is rapping up (2:00 PM CST). The turnout at the National Mall, the pictures they are showing now as the protest winds down,… is pitiful.

Update 2: (2:20 PM CST) Paul from Powerline is walking down the street with the protesters as they leave the mall (Huh?)… Oh, he’s there on business, OK… He says that it is mostly the under-30 crowd. If that is true, it is not the “activism” that got them there, it’s the “hormones”!

Update 4: (5:30 PM CST) Michelle Malkin has some interesting pictures posted from the rally.

Update 5: (7:45 PM CST) The Anchoress has more on the weakened efforts of Rita and Cindy.

Alenda Lux has more on the numbers in DC and London today.