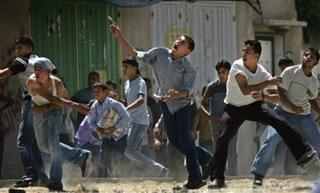 This was the second day of violent protests in Gaza:

Witnesses say the protesters threw missiles and fire bombs while police used tear gas and fired into the air.

Officials say at least 10 people, police and protesters, were injured.

Unemployment has been rife in Gaza since the intifada started five years ago and Israel closed the borders to Palestinian workers. 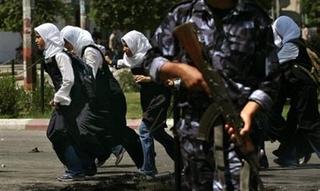 School girls run for protection during the clashes in Gaza between angry protesters and Gaza forces for jobs. (AP)

The aim of the visit was to allow the Palestinians to plan for an orderly deployment of their security forces after the Israeli military pulls out of the settlements, Israeli security sources said.

Israel evacuated all 8,500 Jewish settlers from its 21 Gaza settlements last month under Prime Minister Ariel Sharon’s plan for “disengaging” from conflict with the Palestinians. 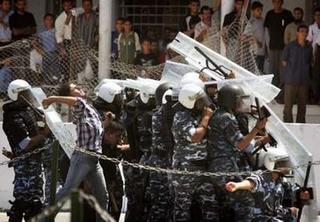 Palestinian special forces shield themselves during clashes in central Khan Younis, southern Gaza Strip, September 5, 2005. Palestinian security forces threw stones, fired tear gas and live bullets in the air as they clashed with hundreds of angry protestors on the streets of the southern Gaza town, after a protest by unemployed Palestinians turned violent. (Reuters)