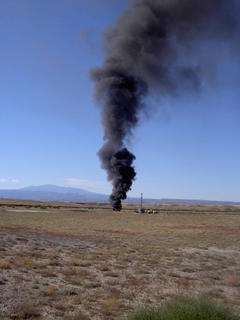 Colorado Utah Natural Gas, Inc. announced that they have completed the drilling of two wells on its Grand County, Utah prospect:

The initial two wells have confirmed the discovery of oil and natural gas. The company estimates that the wells will be on production by the 1st week of September 2005. Evaluation of the discovery is continuing and the company will determine the optimum development strategy within the next few months.

Colorado Utah plans to commence an IPO this year in order to fund its future development plans.

US oil reserves are at least three times the size of Saudi Arabian reserves beneath federal land in Colorado, Utah and Wyoming:

But the researchers at the RAND think tank caution the federal government to go carefully, balancing the environmental and economic impacts with development pressure to prevent an oil-shale bust later.

“We’ve got more oil in this very compact area than the entire Middle East,” said James Bartis, RAND senior policy researcher and the report’s lead author. However, he added, “If we go faster, there’s a good chance we’re going to end up at a dead end. You could end up bogged down.”

For years, the industry and the government considered oil shale – a rock that produces petroleum when heated – too expensive to be a feasible source of oil.

However, oil prices, which spiked above $70 a barrel this week, combined with advances in technology could soon make it possible to tap the estimated 500 billion to 1.1 trillion recoverable barrels, the report found.

That could meet a quarter of the nation’s current oil needs for the next 400 years.