The jailed activist from Houston is seen as a national threat in Australia and will likely be deported back to the US. President Bush is blamed for his confinement. 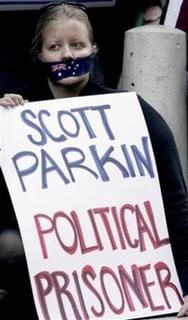 A protestors holds a placards and gag her mouth in Sydney, Australia, Monday, Sept. 12, 2005, during a protest in front of the Prime Minister John Howard’s office in support of a jailed American peace activist. (AP)

The crowd of peace activists protesting Scott Parkin’s arrest attempted at one point to storm the locked building as a staff member entered!

Scott Parkin, the US “peace activist” was jailed by the Howard Government on Saturday as he was preparing to give an activism workshop:

Mr Parkin – who was set to give an activism workshop when detained in Melbourne on Saturday – is being held by the Immigration Department after having his six-month visitor’s visa cancelled on the grounds he is a potential risk to national security.

The Federal Government has refused to say publicly why he is considered a security risk, and supporters say he has done nothing wrong.

About 40 supporters protested against his deportation outside the Australian Federal Police (AFP) headquarters in Melbourne today, some with their mouths taped with the word “ASIO”.

Others chanted: “Deportation no way, let the peace activists stay”.

“Either he was a real threat to the country, and there’s no evidence for that and nothing in his behaviour since he’s come to this country to suggest that, or the Bush Administration doesn’t like this man,” Senator Brown said.

Since 2003, Mr Parkin has targeted US-based multinational company Halliburton over its billion-dollar contracts in Iraq, calling them a “poster child of war profiteering”.

This is further proof that Bush Derangement Syndrome knows no boundaries and respects no borders!