Plucked him out of the water! 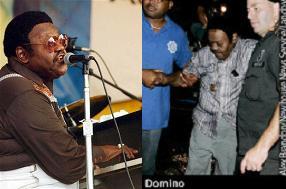 Fats Domino one of rock ‘n’ roll’s chief architects has been rescued from the wreckage.

Michelle Malkin reports on the good news this morning:

Fats Domino who had been unaccounted for in the wake of Hurricane Katrina, was plucked from the flooded city by a rescue boat.

His daughter, Karen Domino White, who lives in New Jersey, identified her father in a picture taken Monday night by a New Orleans Times-Picayune photographer. The singer is seen being helped from a boat by an emergency crew.

There was no word on where he was taken. There was also no word on the whereabouts of family members that had been with him before the storm hit.

I had posted yesterday that Fats was missing HERE.

The 77-year-old R&B legend, whose real name is Antoine Domino, told Embry that he planned to stay at his New Orleans house with his wife, Rosemary, and their daughter. He had not been contacted since Sunday evening.