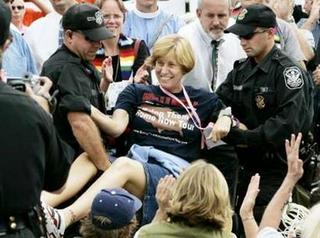 Anti-war protester, and mother of a son who was killed in Iraq, Cindy Sheehan is arrested in front of the White House by U.S. Park Police during a protest in Washington September 26, 2005. Sheehan, whose vigil outside President George W. Bush’s Texas ranch focused attention on the anti-war movement, was arrested on Monday in a sit-in at the White House after refusing to obey police orders to leave. (Reuters)

Monday officially closed the chapter of the “Cindy Sheehan Grieving Mother” charade. As America witnessed the smiling Cindy being carried off to the clanker by police they were reminded that a sucker is born every minute and they were all tootsie pops.

America was duped. And, they know it.

Further evidence that the gig is up… Even John McCain felt he was duped by Cindy Sheehan yesterday after their meeting. “He said it had been misrepresented to him as including some of his constituents. Only one person in Sheehan’s small delegation had ties to Arizona, and that person no longer lives there.”