Palestinian rivals fired rocket propelled grenades as they stormed Arafat’s home last night, dragged him outside in his pajamas, and executed him on the street. 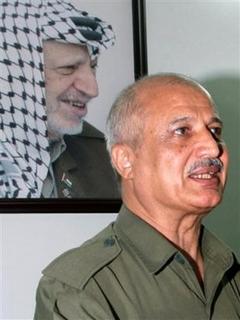 Former Palestinian security chief in Gaza, Moussa Arafat is seen at his office, in Gaza City, in this July, 17, 2004 file photo. He was killed yesterday as Palestinian gunmen stormed his home. There are now concerns that his son was taken from the home and later executed. (AP)

Manhal Arafat, the son of General Moussa Arafat who was shot to death Tuesday night, was kidnapped and killed by his abductors.

About 100 masked gunmen stormed the heavily guarded home of Moussa Arafat, Gaza’s former security chief, before dawn Wednesday, dragged him out in his pajamas and killed him in the street in a burst of gunfire – a brazen challenge to Palestinian leader Mahmoud Abbas just days before Israel was to hand Gaza to Palestinian rule.

Arafat, 65, was killed after a 30-minute gunbattle between the assailants and dozens of Arafat’s bodyguards. The fighting with rocket-propelled grenades and assault rifles raged just a block from the headquarters of the Palestinian Preventive Security Service.

The Popular Resistance Committees, a violent group made up largely of former members of Abbas’ Fatah movement, later claimed responsibility. The group said it killed Arafat, a cousin of the late Yasser Arafat, to punish him for alleged corruption after the Palestinian security forces had taken no action against him. “We have implemented God’s law,” a spokesman, Mohammed Abdel Al, told The Associated Press.

Abbas said he would track down the killers – a pledge immediately put to the test by the bold claim of responsibility. Abdel Al said his group would resist arrest or any attempt to be disarmed.