On the Eve of Afghanistan’s First Democratic Parliamentary Elections…

“If the dam collapses the whole Helmand valley would be flooded, risking the life of tens of thousands of people.” 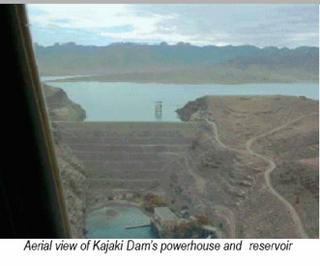 The Taliban attacked the dam in November, 2004 when six government soldiers were killed in an ambush.

On August 15, 2005 it was reported that security officials had spoiled another attempt on the Kajaki Dam:

Security officials in the southern Helmand province claimed foiling an attempt to destroy a dam while huge quantity of weapons were recovered in the Bala Koh area of the Sarobi district, east of the central capital.

He said the seized arms included 172 bullets of MB-12, 123 mortar bullets and 126 mortar fuses. The arms were hidden by Taliban in the Zamin Dawar area of the Kajaki district to target and destroy the dam.

The UN complained of Allied air raids during the fighting in 2001, fearing that the US led Allied Forces would cause damage to the Kajaki Dam. “If the dam collapses the whole Helmand valley would be flooded, risking the life of tens of thousands of people,” the UN said. (This UN article was reprinted several hundred times in the mainstream news. But, the story about the assault on the Kajaki Dam on Saturday did not get the same widespread attention or UN condemnation.)

It is amazing how the Taliban sees things today verses four years ago… This is what the Taliban was saying during the air raids in 2001 when the US and Allied Forces ousted them from power:

“So far water has not started gushing out of the dam but any further bombing will destroy the dam,” Muttaqi said. “It may cause widespread flooding, putting at risk the lives of thousands of people.”

Kajaki, 90 kilometers (56 miles) northwest of Kandahar, contains 2.7 billion cubic meters of water. It normally produces 150,000 kilowatts of electricity per hour and irrigates land farmed by 75,000 families in a desert area where water is a precious commodity, the minister said.

“America wants to destroy everything in Afghanistan,” he said.