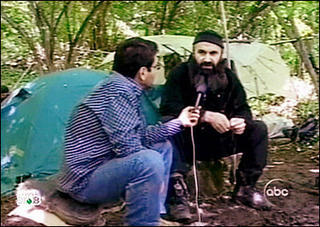 A TV screen grab shows US ABC journalist Andrei Babitsky (L) interviewing Chechen warlord Shamil Basayev. The video aired on ABC TV Nightline earlier this year. Russia was furious responding,”How would Americans react to a foreign journalist meeting with Osama bin Laden or Abu Masad al-Zarqawi in a “secret” hiding place, interviewing him, and then posting the video up on their website?” (AFP)

Today is the One Year Anniversary of the Beslan School Massacre. Across the world in Chechnya it was announced that the mastermind behind the Beslan Massacre, Shamil Basayev has rejoined the Chechen Government:

“He has promised to be more responsible,” Ferzaouli, who lives in Denmark as a refugee, said about Basayev.

“Basayev is a soldier, but he cannot refuse to take orders given by the state defense council,” which would put him “out of the law,” Ferzaouli said.

The state defense council is the inner circle of top field commanders and Chechen leaders that makes key decisions for the Chechen force.

The Kavkaz Center last week said Basayev had rejoined the Chechen government in a move that analysts said reflected the desire to regroup following the killing earlier this year of their leader, Aslan Maskhadov.

Danish Foreign Minister Per Stig Moeller said he was “deeply disappointed that you form a government that is working for democracy, and you include a terrorist like Basayev.” “The Chechens are losing goodwill,” Moeller told Denmark’s public radio. “They lost goodwill with the massacre in Beslan, and now they are again losing goodwill when they take a Beslan murderer into the exiled government.”

Heavens! You mean Basayev will have to “stay in the law” with his new governmental position? Isn’t that a bit much to ask a mass murderer of 331 people, more than half of them children?