Just because the Baathists in Syria pulled out of Lebanon don’t think that they have changed their colors. After what seemed like a lull in violence, they are once again showing their brutality:

* Targeting and Attacking Anti-Syrians in Lebanese Society
* Resurgence in Bombings, the latest blast seriously injured a female journalist
* Breaking up Democracy Meetings in Damascus
* Restricting Internet Use in Syria

A Lebanese news anchor lost her arm and leg in a bomb blast on Sunday. She works for a private news agency in Lebanon and was frequently critical of the Syrian Regime. 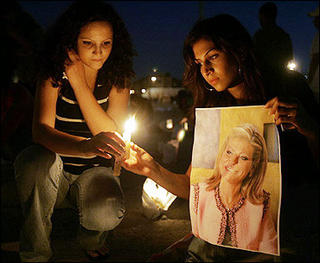 Lebanese women, holding a picture of LBC anchorwoman May Chidiac, light candles during a gathering in downtown Beirut in solidarity with Chidiac who was targeted the day before in a car bombing. Lebanon vowed to confront the wave of attacks against anti-Syrian figures after Chidiac was targeted in a car bombing, adding to a climate of fear in the country. (AFP)

Thousands of students rallied in Lebanon after a string of terror bombings against Syrian dissenters in Lebanon. The latest bomb attack on Sunday severely injured a female journalist who works for a popular private televsion station as she was getting in her car:

May Chidiac, a veteran news anchor and talk show host, lost her left arm and leg after a bomb exploded in her car Sunday.

Chidiac was attacked in the town of Jounieh, north of Beirut. Doctors said Chidiac was in intensive care.

Chidiac, who is in her 40s, works for the Lebanese Broadcasting Corporation, a popular private station at home and abroad. It opposes a Syrian role in Lebanon.

The attack on the broadcaster, and the demonstrations, were reminiscent of an upheaval this year, when protests after the assassination in February of Rafik Hariri, the former prime minister, forced the Syrian-backed government to resign, and Damascus to withdraw its army.

This time the political landscape is different. Anti-Syrian groups are now in government. They are sharing power with some of Syria’s allies, and are divided among themselves.

Hundreds of students at the private Notre Dame University, where Chidiac teaches journalism, and at other university campuses began the protests. They had been called by student groups representing Christian and Muslim political factions opposed to Syria.

The students demanded that the Syrian security system be rooted out, and said that system was responsible for the bombings.

“Let us immediately act to confront this terrorist monster, and finish off the remnants of the security system,” the students said in a statement, referring to forces whom Syria and its Lebanese allies have long used to control the country.

Lebanon has asked the US and France to help with the security situation in the country following the brutal attack.

Freedom for Egyptians has more on the “Attempted Assassination on Freedom of Expression in Lebanon.”

Syrian Authorities violently barged in on a democracy meeting in Damascus on Sunday (via Syria Comment PLUS):

Syrian security forces first surrounded then raided a house where pro-democracy activists were meeting on Monday, destroying documents and ordering the gathering’s participants to disperse. The broken-up meeting had been organised by the Commission for the Defence of Democratic Freedoms and Human Rights and was being held in Khan al-Shaykh, some 20 kilometres south of Damascus.

Syria Comment PLUS also tells how the Baathists are restricting internet use in Syria:

Today I was looking for articles on the Internet to help me in Installing a driver for my Modem in Linux, and finally after long search it looked like the best resource for Linux Modem Drivers is http://linmodems.technion.ac.il/, and as you can see it ends with “il” which means Israeli web site, then a web page showed that ugly message that says “FORBIDDEN”! AGGHHHHHH! And under that message a form that asks you if you want to contact them and tell them your opinion about blocking this web site! With full info about you like full name,phone no , etc….. And the problem description was “Problem Description:This URL has access denied according to STE request”, STE means Syrian Telecommunication.
I disconnected and directly called the support and asked them right away, why did you block this web site? And the guy answered what? I told him I was trying to access a web site about Linux programming and it is blocked ….. The guy replied that we only block Bad web sites (PORN) and I have no idea about the web site you are talking about … I told him about the STE thingy, so he said if that – I don’t know!

After trying that Linux web site which has nothing to with anything but Linux Modems I thought let’s try the Wired News, I tried and yah it is blocked too!

Now I’m thinking …. Is the Messengers and other Internet resources will be blocked as it is in the other ISPs ?

Why this is happening? Till when we’re gone stay like that?

It looks like that all the other private ISPs that we are promised they are coming will be under the hand of the Syrian Telecommunication and will be all the same.

Stefania at Free Thoughts has the horrific pictures of May Chidiac before and after the bombing in Lebanon.