The Daily Times of Pakistan is reporting today that Syria is feeling the pressure from the US and Iraq. And, Syria has offered to renew dialogue with the US to improve relations and to help stop the violence in Iraq:

The latest Syrian offer came two days after Washington reiterated its accusations that Syria was not doing enough to prevent anti-US militants from crossing its border into Iraq. “Syria is fully ready to contribute towards preventing the bloodshed of the Iraqi people and to enable them to reach their hoped-for goals,” Tishrin, a Syrian government newspaper, said in an editorial. “Syria has stressed this fact to the Americans and has called them for dialogue and cooperation,” it said. “It’s still sticking to this stand and to its call. The problem is now theirs (the Americans’) and not Syria’s.”

“Syria, more and more, is being recognised as a destabilising element in the region,” Adam Ereli said. “It’s not just about Iraq; it’s about Iraq, it’s about Lebanon, it’s about the Palestinian Authority. Because there’s a connection between Syria and terrorism and murder and mayhem in each of these three different areas.” The United States has imposed economic sanctions on Syria, long on the State Department list of state sponsor of terrorism.

Syrian President Bashar Assad’s government insists it is doing what it can to keep foreigners from crossing its border into Iraq and has said in the past it was trying to control militant anti-Israeli Palestinian groups based in Damascus. 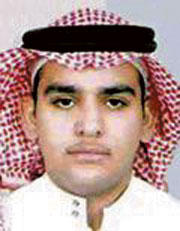 Syria is busted, again… A Saudi Al Qaida member told Saudi News how he traveled through Syria to join the forces in Iraq:

Ahmad who sustained severe burns all over his body was arrested by Iraqi police who later handed him over to Saudi authorities. He told how Al-Qaeda was recruiting young Arabs to fight alongside insurgents in Iraq, adding that he had entered Iraq through Syria with the help of smugglers.

Ahmad said he had gone to Iraq out of a conviction that he should do something to help his Iraqi brothers though he had not consulted scholars about his plans and in fact ignored the advice of his parents and family. He said he was taken to an Al-Qaeda cell in Doura district in the south of Iraq where he was trained to drive an oil tanker.

On the day of explosion, he was told to take the tanker to the Al-Mansour neighborhood. “They asked me to stop the tanker near a concrete barrier, saying someone would come to receive the tanker from me. But no sooner had I stopped the tanker than it exploded,” he said.

Also, this weekend, Little Green Footballs noted an article on YNET that reported that Syrian President Assad threatened Lebanese Prime Minister Rafik al-Hariri during their last meeting. Hariri was later assassinated causing the revolt against the Syrian Regime in control of Lebanon. The UN is planning on talking to the government in Syria regarding the murder of the Lebanese politician.

Syrian Blogger Oubai Shahbandar at Syria Comment PLUS does not believe that negotiating with the Assad Regime is a good idea considering “Assad II acts, as his father did, on the basic assumption that he can get away with murder.”