Another look at Afghanistan… 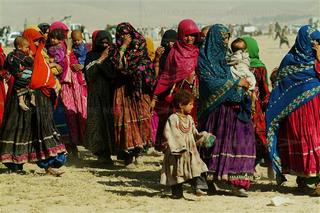 The Kuchis, Afghan nomads, arrive to vote Sunday Sept. 18, 2005 at polling stations erected under tents in the middle of the desert. Some of the nomads had to walk for hours to get there. Many of the Kuchis have never been officially registered anywhere registered, and they do not know their age. Some Kuchis appeared to be 10-12 years old that were voting. After voting, the men, women (and children) dip their fingers into permanent ink. (WPN)

The BBC, however, has an article: Have Afghnis fallen out of love with democracy already? The BBC writer believes that the turnout was low and that the voters were disenfranchized with the election.

President Karzai said, “We are making history. It’s the day of self-determination for the Afghan people. After 30 years of wars, interventions, occupations and misery, today Afghanistan is moving forward, making an economy, making political institutions.”

The turnout figures will be known on Monday. The turnout did appear low but picked up in the afternoon throughout the country.

Update: (Monday AM) The election is being hailed as a success by the international community. Unfortunately, the turnout was lower than expected. But, the fact that 50% of the nation’s voters went to the polls knowing the danger they may be in, is remarkable:

Afghan and international officials hailed Sunday’s elections as a major success in the country’s march toward democracy, but chief electoral officer Peter Erben said reports from about one-third of the polling stations indicated a turnout of just over 50 percent.

Erben said that Afghanistan “should be satisfied with the turnout” because it compared well with elections in other postwar countries.

President Hamid Karzai praised voters — who cast ballots in schools, mosques and even desert tents — for coming out “in spite of the terrorism, in spite of the threats.” U.N. Secretary-General Kofi Annan said the election showed “the clear determination of the Afghan people to pursue the peaceful and democratic development of their nation.”

Taliban insurgents had called an election boycott. Attacks killed at least 15 people, including a French commando, in the hours before and during voting — the latest victims of violence that killed more than 1,200 people in the past six months.

But with tens of thousands of Afghan and foreign forces providing security, there were no spectacular assaults. Election officials said no one was killed in attacks near polling stations — although three voters were wounded — and only 16 of the 6,270 stations did not open because of security threats or logistical problems.

“Everybody should be proud today,” said Abdul Malik, 33, after casting a ballot at a high school on the northern edge of Kabul. “The Taliban can do nothing to stop this election.”