Please, take the time and watch the 3 and 1/2 hour video of the Pro-Chavez, Anti-Bush, Pro-Marxist, Pro-Castro, Anti-Capitalist, Pro-Palestinian, Anti-Jew, Anti-Military, Anti-American, Pro-Racist, Pro-Anarchy Rally in Washington from Saturday. My favorite part is the last ten minutes where the speakers are thanking the 25 people for coming out to support the cause(s).

Did I say Anti-War?

Take the time to hear the great words from your Democratic Party Leaders including actress Jessica Lange (“In my country the atmosphere is poisoned!”) ; former U.S. Attorney General Ramsey Clark (back from his stint as Saddam Hussein’s Defense Lawyer); Rep. Cynthia McKinney (D-GA- “Bush is responsible for 9-11!”); Cindy (“Occupied New Orleans”) Sheehan, did you know she is the mother of soldier killed in Iraq?; Rev. Jesse Jackson (Back from his visit to prop up Hugo Chavez!), and many, many others. 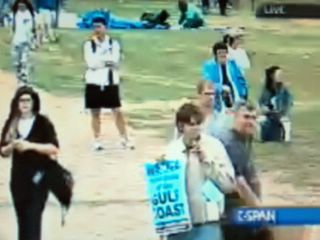 This crowd shot, taken from the stage, shows the excited crowd can hardly contain themselves at the National Mall on Saturday, September 24, 2005.

ANSWER says We Did It!

If ANSWER was able to evacuate 300,000 before the last speaker was finished talking, they need to go to Louisiana and help the local officials down there before the next hurricane! 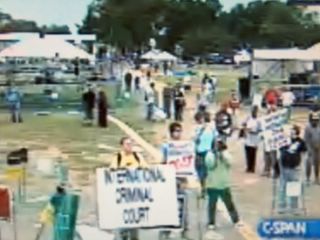 This crowd shot shows that the last speaker put the crowd in a frenzy at the Anti-War Rally on Saturday in Washington D.C.

With the support of everyone in the antiwar movement around the country, the September 24th demonstration was a magnificent success. We had hoped for 100,000 people, and more than 300,000 joined the protest. We received media coverage all around the world. The article below, from the Washington Post, took up the front page of the newspaper above the fold. The ANSWER Coalition initiated this demonstration on May 12, 2005 under the slogans “Stop the War Against Iraq” and “End Colonial Occupation from Iraq, to Palestine, to Haiti and Everywhere.”

We also later connected the war in Iraq with Bush’s criminal neglect in the aftermath of Hurricane Katrina. On May 12, we also proposed to the United for Peace and Justice that our two coalitions enter into a united front for the purpose of maximizing the broadest possible turnout in the streets. We believe that the final agreement to organize a joint rally and joint march was in the best interests of launching a wider struggle against the war-makers. 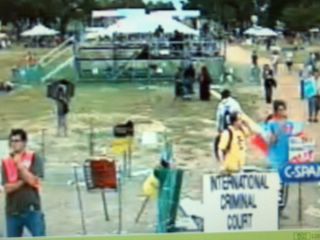 Another shot from the stage shows the crowd getting pumped up to carry their message(s) back to the the people!

But, these photos are taken right from the video of the event that was broadcast on CSPAN. You can go ahead and have a look for yourself. As mentioned the video is over 3 hours long but there are numerous crowd shots.