Robert Byrd’s democratic support base in West Virginia continues to shrink due to partisan shift of the values voters and continued indictments of the democratic party faithful. In what is projected to be a very tight race for the senator, the loss of these votes could spell doom for the former kleagle. 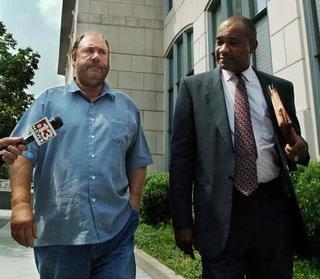 87 year old Senator, Robert Byrd from West Virginia, announced his intent to run for a record 9th term in the US Senate on Tuesday, September 27th. The former Kleagle said he was “Ready to go another round,” as he made his announcement from the State Capital Rotunda.

But, his support base continues to be indicted for voter fraud.

Logan County Clerk Glen D. Adkins was arrested in July on a federal charge of conspiring to buy votes:

Adkins was brought into a federal courtroom in Charleston Thursday, July 21, 2005, shackled at the ankles after being arrested on a federal charge of conspiring to buy votes. He was released on a personal recognizance bond.

Adkins allegedly took money from other people known to the grand jury to buy votes for candidates on slates he and others supported.

A dozen other people have been charged, including Lincoln County Circuit Clerk Greg Stowers, who has pleaded not guilty to conspiring to buy votes.

Lincoln County Circuit Clerk Greg Stowers and three others accused of participating in a conspiracy to buy votes pleaded not guilty on Thursday.

The four who entered their pleas before a U.S. magistrate in Charleston:

Another defendant — Toney Dingess, 34 (“Zeke”)– was scheduled to be arraigned Thursday afternoon.

The indictment involved voter fraud allegations dating back to 1990!

The indictment charges that all five defendants are accused of conspiring to pay or offer to pay residents for their votes in elections held in 1990, 1992, 1994, 1996, 1998, 2000, 2002 and 2004 “for the purpose of selecting and electing candidates for the United States House of Representatives and in some instances, for the presidency and vice presidency of the United States.”

In Lincoln County, population 22,100, Democrats outnumber Republicans 4-to-1; the indictment focuses largely on the party’s primary elections, going back to 1990.

Prosecutors allege the defendants enlisted precinct captains to pay off voters and hand out slates listing the preferred candidates. Most votes were bought for $20 apiece, prosecutors said. The indictment also said Stowers drove to Kentucky and filled his pickup truck with booze for distribution to voters during the 1994 primary.

The evidence includes footage from a hidden camera and microphone that informant Wayne Watts wore during the 2004 primary as he tried to get people to talk about buying votes.

These are supposed to be pillars of a community, but the evidence was so strong that all four pleaded guilty.

Another Logan County man was indicted on August 18th of this year:

Federal prosecutors say Perry French Harvey Jr. conspired with another person to get a House of Delegates candidate elected.

Harvey is accused of accepting $2,000 to pay for votes, according to the indictment. Prosecutors did not identify the candidate. Four Democrats and two Republicans ran in the Logan County primary last year.

Senator Byrd sent out a taxpayer-paid post card this week promoting the outstanding efforts of Senator Byrd for the betterment of West Virginia:

Thousands of West Virginians received a taxpayer-paid postcard about U.S. Sen. Robert Byrd’s role in the salvation of Charleston’s Air National Guard unit just as he was announcing he would run for a ninth term.

Tom Gavin, Byrd’s spokesman, said the timing of the mailing was coincidental and within the guidelines of the Senate Ethics Committee.

“It went to 270,000 residents in 10 counties where the 130th Airlift Wing live and work,” said Gavin. “The production process began just after the BRAC Commission voted, and once that is started the timing is out of the senator’s hands.”

“Without Senator Byrd’s leadership, hard work, and dedication to the Guard, there would be no 130th Airlift Wing. Thank you Senator Byrd,” writes Tackett.

U.S. Rep Shelley Moore Capito, R-W.Va., said, “I send mailers from time to time. I try to stick to the informative. I’m getting ready to send one out now on prescription medications. Everything has to go through a commission to make sure it isn’
t filled with too many campaign statements.”

“I think the timing of his mailing is obvious,” she said. “But I guess the taxpayers will have to make their minds up on that.”

Someone really ought to pass this on to Nancy “Culture of Corruption” Pelosi.