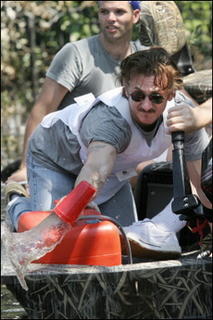 US actor Sean Penn bales water out of a boat with a plastic cup as he and members of his entourage make an attempt to rescue stranded people in New Orleans. (AFP)

I am just speechless with this one! What is even more funny is that this story is traveling around the world from The Australian to The Turkish Press. I wonder what his friends in Iran think?

EFFORTS by Hollywood actor Sean Penn to aid New Orleans victims stranded by Hurricane Katrina foundered badly overnight, when the boat he was piloting to launch a rescue attempt sprang a leak.

Penn had planned to rescue children waylaid by Katrina’s flood waters, but apparently forgot to plug a hole in the bottom of the vessel, which began taking water within seconds of its launch.

The actor, known for his political activism, was seen wearing what appeared to be a white flak jacket and frantically bailing water out of the sinking vessel with a red plastic cup…

…With the boat loaded with members of Penn’s entourage, including a personal photographer, one bystander taunted the actor: “How are you going to get any people in that thing?”

The plug, Sean… The plug.

Update: California Conservative as a photo from a “roving” photo(shop)journalist.