The average number of births had fallen below the level of simple reproduction — that is to say, below 215 children per 100 women — back in the 1960s. That was when demographers sounded the alarm, warning the ruling authorities about an imminent demographic crisis.

Simple reproduction requires an average of 215 births per 100 women throughout their lifetime, while a higher birth rate guarantees population growth. Unfortunately, the average expected number of children according to the survey is only 183 per 100 families, which is not enough even for population reproduction. The actual number of children born into the families surveyed, however, is 151.

So Russia, on average, has a “shortfall” of one child per family — compared to both an ideal number and a desirable number.

With the current birth and mortality rates, when Russia is on the upturn of another demographic wave, the country’s population is declining by 700,000 a year. In less favorable years, this decline goes as high as 1 million. Within 30 years, the population loss will be 20 to 30 million. This is comparable to the total losses not only of Russia, but the entire Soviet Union in World War II.

The population dropped by half a percent in 2003. However the percentage of immigrants in the population increased:

The population dropped 0.5 percent (767,600 people) in Russia in 2003 compared with the previous year, according to a report by the State Statistics Committee of Russia. As of December 1, 2003, the number of Russia’s population was 144.2m people.

There are also concerns in Russia as immigration (including illegal immigration) is viewed as a threat to Russian society:

Russian General Andrei Nikolayev believes unless there are additional measures to control the borders, the number of Chinese citizens in Russia will exceed three million in the next four to five years.

According to the Russian Federal Migration Service, there are over two million migrants in Russia. The United Nations office in Moscow has registered 70,000 asylum seekers from outside the former Soviet Union. The FMS predicts that an estimated two to three million of the 25 million ethnic Russians living outside Russia will return in the next two years.

The head of FMS’s external migration department said that Russia’s honoring of the Geneva Convention has turned the country into a “holding pen” for refugees from around the world. Many enter illegally, and hope to use Russia as a stepping-stone to the West, but tightened border controls in western Europe have left potential refugees stranded in Russia.

Refugees in Russia receive little assistance from the UNHCR or FMS. The claims of asylum seekers have not been processed, leaving them without official papers and the right to work. Their lack of papers also limits their access to housing, schooling, and medical care.

In 2001, Moscow alone, claimed over a million immigrants in the city:

Moscow authorities say that 1 million immigrants now live in the city, 850,000 of them illegally. More than 2 million people were detained in Moscow last year alone for not having registration papers.

But, many Russians feel threatened by the foreigners who come flocking into their country. 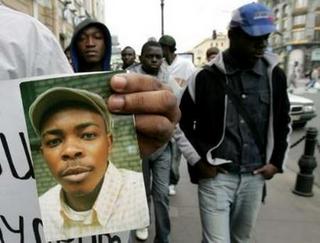 A foreign student holds a photo of his Congolese schoolmate Epassak Roland Franz, 29, during a protest on Nevsky prospect in St.Petersburg September 15, 2005. Dozens of students protested over rising racism in Russia on Wednesday after one of their classmates died after an attack they believe was racially motivated. Epassak died on Wednesday in hospital after failing to recover from injuries he received when he was attacked last week. Prosecutors said there was no evidence yet that the attack on Epassak had been racist, but the protesters saw it as the latest in a string of racist murders in Russia’s second city. (Reuters)

In today’s Russia, writes MARK MACKINNON, people of colour live in perpetual fear. Xenophobia is on the rise, and violent skinheads don’t deserve all the blame.

It’s a long way from the days when the Soviet Union bragged of seamlessly blending its Slavic, Caucasian and Central Asian populations, claiming to have created a non-racial “homo sovieticus,” while condemning the United States and other Western countries for their inequalities and racial violence.

The death of the Nigerian student was just one in a string of racial incidents around People’s Friendship University, which was established in 1960 (and initially named after Zaire’s first prime minister, Patrice Lumumba, killed in a U.S.-backed coup) to draw foreigners to what was supposed to be a free and equal communist utopia.

Several weeks ago, six foreign students were beaten by skinheads as they waited for a bus just off campus. In the past month and a half, there have been several attempts to penetrate the campus’s outer fence, repeated bomb threats and as many as eight suspicious fires.

That’s why it’s so hard for students such as Tolessa to accept the police verdict that a horrific blaze that broke out in a dorm on Nov. 24, killing 43 foreign students and putting 200 in hospital, was caused by bad electrical wiring.

African and Asian students talk of the police as enemies, saying they often have to pay large bribes just to avoid arbitrary arrest.

“Before they even investigated, they said it wasn’t arson,” says Anchu Regga, an Ethiopian refugee who was sleeping that night not far from Block No. 6, where the fire started. “But there was a fire in another block the next day, and another one two days after that. I can’t see how they can all be accidents.”

Even Russians studying at the university say it’s obvious that a hate group is prowling the campus, intent on frightening the foreign students into leaving the country.

Many young people, he says, have come to feel that their country, once the centre of an empire, was betrayed somehow, and ethnic minorities have become the scapegoat of choice.

It’s not an idea limited to Russia’s young. In last month’s parliamentary elections, two parties with ultranationalist leanings made surprising gains. Vladimir Zhirinovsky’s oddly named Liberal Democratic
Party (LDPR), which has represented the far right since the breakup of the Soviet Union, nearly tripled its share of the vote to 11.5 per cent. That was good for third place and a significant share of seats in the State Duma.

Even more surprising was the appearance of a new political movement called Rodina, or Motherland. Formed just three months before the election, it blended open xenophobia with a nostalgic call for the renationalization of key resources to claim almost 10 per cent of the vote.

So now, Rodina and the LDPR, both branded fascist by their opponents, have more seats than either the Communists or Russia’s battered liberals in the Duma, making them a force with which President Vladimir Putin will have to contend, and perhaps make deals.

Yuri Tabak of the Moscow Human Rights Bureau said the rise of anti-foreigner sentiment has roots similar to those of the anti-Semitism that arose in Weimar Germany in the 1920s. A once-proud empire has been humbled, there is widespread social chaos, and people are looking for someone to blame. Then, as now, the targets chosen by many are ethnic minorities.