Thanks to Mr. Right at “In the Right Place” blog!

This is a blockbuster story: the Red Cross was ready to deliver supplies to the people in the Superdome on Monday/Tuesday of last week and were blocked from doing so by the local government.

Hugh Hewitt: You just broke a pretty big story. I was watching up on the corner television in my studio, and it’s headlined that the Red Cross was blocked from delivering supplies to the Superdome, Major Garrett. Tell us what you found out.

Major Garrett: Well, the Red Cross, Hugh, had pre-positioned a literal vanguard of trucks with water, food, blankets and hygiene items. They’re not really big into medical response items, but those are the three biggies that we saw people at the New Orleans Superdom, and the convention center, needing most accutely. And all of us in America, I think, reasonably asked ourselves, geez. You know, I watch hurricanes all the time. And I see correspondents standing among rubble and refugees and evacuaees. But I always either see that Red Cross or Salvation Army truck nearby. Why don’t I see that?

Hugh Hewitt: And the answer is?

Major Garrett: The answer is the Louisiana Department of Homeland Security, that is the state agency responsible for that state’s homeland security, told the Red Cross explicitly, you cannot come.

There is more at Right Wing News…

Considering the information disclosed to Hugh Hewitt on relief supplies to the dome today, the Left may want to change these outrageous bumper stickers they had made after this “natural disaster”… 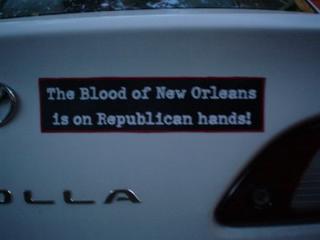 I doubt we’ll see any of those disgusting bumper stickers made by Republicans any time too soon, even with the continual stream of mounting evidence and errors of the local and state officials of Louisiana.

Update: Glenn Reynolds has more. Political Teen has the video.