Young Ethiopian Diasporans writes that Jimmy Carter is touring Africa presently, and is expected to publish his final report on the Ethiopian elections.

Ethiopians are not pleased with Jimmy Carter!

Why isn’t Mr. Carter horrified that a government he has worked so closely with is committing clear human rights violations? Liberals in America are very trigger happy about volleying accusations of ‘coddling dictators.’ Their dirty little secret is that their premiere spokesperson, who took time to condemn Abu Gharib and urged its closing, has his own dictator boy toy.

Aren’t Ethiopian lives worth as much as those in Abu Gharib? 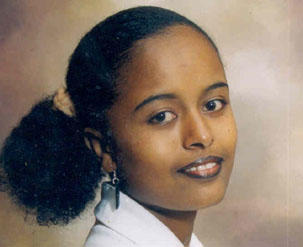 ShiBire Desalegn is the first person to be killed when Meles Zenawi unleashed his forces following a peaceful protest by Addis Ababa University (AAU) students on June 6, 2005. She was shot and killed by EPRDF troops as she and her friends tried to block the road in Kotebe that leads to the Sendafa torture camp.

She helped escape several AAU students from torture by helping them jump from the trucks that were taking them to Sendafa. She didn’t have any weapon. But that didn’t stop the EPRDF troops from shooting her to death.

A high caliber bullet pierced through her neck. (via Ethiopundit)

I am no genius, but to me, few ferenjies have contributed to Ethiopia’s current state of Battered Woman’s Syndrome-ness than former president Jimmy Carter. He is the enabler who counsels a woman bashed up by her husband to be patient, and that she also has to take responsibility for “provoking” her husband into bashing her against the wall. “After all,” Jimmy Carter tells the woman whose eyes are bloody and swollen, and whose body is coarse with bruises, “after all, didn’t he buy you a nice outfit? See? Deep down he loves you. So, be patient. Go back, clean yourself up, and make him dinner. I’ll talk to him about not beating up as often. In fact, he’s only beaten you up twice this week. I told you he loves you.” He give the woman a bloodcurdling smile before sending her back to den.

For more than 14 years, that’s what Mr. Carter has been telling Ethiopians. YOu could do worse than Meles. So what if he bashes us up occasionally? “He gave you elections, didn’t he? Now clean up the blood and let’s not provoke him into killing you.”…

You can read all of Weighegud’s thoughts HERE

And, Ethiopundit contrasts and compares the situation in Ethiopia to a Moa Tse Tung uprising…

This post in May HERE included the first reports of Jimmy’s flawed observations.