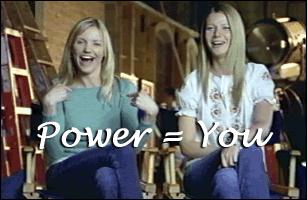 The Anchoress was a tad out of sorts today about Gwyneth Paltrow’s choice of habitat:

Of course, Gwyneth the environmentalist, drives that foreign terrain in an SUV…

Tinseltown’s anti-choice left is certainly making an ass of itself this time (2003). “Many of the Hollywood celebrities behind the new campaign against gas-guzzling SUVs are hypocrites who consume huge quantities of fossil fuels in their stretch limos, Gulfstream jets and oversized Beverly Hills mansions,” the New York Post’s cheeky Page Six column noted today.

Paltrow’s latest role: appearing with Cameron Diaz in ads for Lear’s Enviromental Media Association accusing SUV owners of supporting terrorism. “But some of Paltrow’s neighbors find her to be an odd choice for an anti-SUV poster girl,” the Post noted.

“She drives a Mercedes-Benz SUV,” revealed one of Paltrow’s neighbors in Manhattan’s West Village. “Not only does she drive an SUV, she selfishly parks it on the sidewalk in our neighborhood.”

I think The Anchoress said it best, “I think we’ll get by, hon!”

Update: (Saturday, Sept. 17) Michelle Malkin notes that Arianna enjoys a comfortable ride herself, on the way to the Sierra Club!