A fight broke out on the field at the Inaugural National Women’s Football Championship Game in Pakistan! 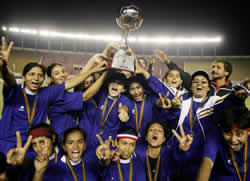 The Punjab women celebrate their victories on Thursday. First they beat the Pakistan women 1-0. Then they beat them in a brawl on the field in the first ever womens national championship football game in Islamabad, Pakistan. (Daily Times)

The Inaugural National Women’s Football Championship Game in Pakistan ended in a brawl on the field between the two teams!

A scuffle broke out between the rivals after the match when Punjab tried to celebrate their victory which enraged the losers led by their star striker Khalida Noor. The girls of both teams freely kicked and punched each other. The catfight forced the tournament organisers to enter the ground and put an end to the brawl.

Punjab’s only goal came from Sheka Nazeer on a penalty kick in the 53rd minute. WAPDA protested the referee’s decision and threatened to leave the ground without completing the match but resumed the play after the intervention of Pakistan Sports Board (PSB) director general Arif Mehmud Siddique. As the match restarted, the WAPDA girls, who looked physically strong compared to the opponents, started pushing and pulling the Punjab players. Sensing the high tampers of WAPDA, match referee Abrahim Khan blew the final whistle three minutes before the scheduled time.

Islamabad (pictured below in the white!) received the fair play trophy with Rs 10,000 cash prize! 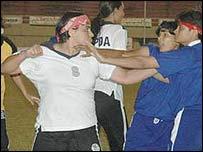 The women from Pakistani Water and Power Development Authority (WAPDA) were favored in the inaugural final.

The players nearly came to blows again at the Trophy Ceremony!

“WAPDA goalie Azra Matloob stopped the penalty kick and Sheka Nazeer scored off the rebound, but since Azra got injured the WAPDA players were furious,” said a Pakistan Football Federation spokesman.

Again showing that punch-ups are not restricted to the men’s game, the players nearly came to blows again at the prize ceremony when they exchanged some hot words.

The biggest fears of violence before the game had come from Islamic hardliners, who earlier this year caused a riot during a mini-marathon in Lahore because women were participating.

To avoid any trouble, players in the football tournament were not allowed to wear shorts or t-shirts and male spectators were also banned.