Pakistan captures a drone airplane in a raid on an Al Qaeda hideout! 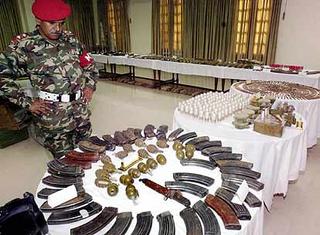 A Pakistani army soldier stands near a display of weapons for media representatives in Peshawar, September 13, 2005. (Hindustan Times)

Pakistani soldiers siezed a Chinese made drone airplane capable of carrying weapons in an Al Qaeda raid on Monday:

Pakistani soldiers seized an unmanned drone aircraft in a raid on a suspected Al Qaeda hideout in North Waziristan Agency near Afghanistan, the Peshawar corps commander said on Tuesday.

Militants used the Chinese-made vehicle to spy on security forces in the rugged area, Lt Gen Safdar Hussain told reporters during a briefing. Twenty-one people had been arrested in Monday’s raid on a compound and madrassa near Miranshah, he said, adding that relatives of a former Taliban minister owned the buildings.

“The terrorists used the RPV (remotely-piloted vehicle) to check the position of security forces and attack them,” the general said, adding that the drone was capable of carrying weapons. A military officer from the army’s Signal Corps said the vehicle had a sophisticated, wide-angle camera to take pictures of targets on the ground. 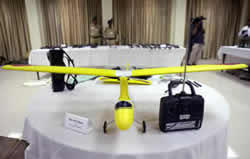 Security forces also seized a “suicide jacket” and Jordanian, Afghan and Pakistani passports along with Al Qaeda training material from the compound, the corps commander said, adding, “This madrassa was an Al Qaeda and Taliban stronghold and operational centre that we have secured now.”

A “junior-level administration official” was arrested for “leaking sensitive information” to terrorists and expressed his ‘displeasure’ over the political administration’s performance.

A second administration official was also taken into custody during a raid on a terrorist compound near Mir Ali town on Monday, Gen Safdar added.