The Harvard educated, Illinois Democratic Freshman Senator, Barak Obama, who was raised by his white grandparents in Hawaii, jumped on the Katrina Race Train this weekend. 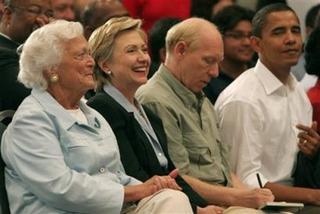 Is this a sign of the future, Barak Obama and Hillary Clinton photographed together? (AP)

Barak said on ABC’s “This Week” that he would not consider the government’s response as racist, but then continued…

”Whoever was in charge of planning was so detached from the realities of inner city life in New Orleans … that they couldn’t conceive of the notion that they couldn’t load up their SUVs, put $100 worth of gas in there, put some sparkling water and drive off to a hotel and check in with a credit card,” Obama said.

”There seemed to be a sense that this other America was somehow not on people’s radar screen. And that, I think, does have to do with historic indifference on the part of government to the plight of those who are disproportionately African-American.”

Obviously, since Barak was in Europe during the hurricane, he did not have the opportunity to see these pictures.

Barak, whose black father abandoned him when he was an infant and moved back to Africa, also took some pompous racial pot shots at Judge John Roberts this weekend:

Obama, appearing on ABC’s “This Week,” picked up the same head-and-heart theme: “I think what we do need to ask ourselves is whether he has the heart, the breadth of perspective and the recognition that historically the role of the court has been to look out not just for the powerful but also the powerless.

“I think that Katrina does indicate that we’ve got a lot of problems in our midst … in terms of poverty, in terms of the differences in life opportunities for blacks, whites, Hispanics,” Obama said. “That has to inform how we think about every branch of government and their functions, and I think that the Supreme Court is no different.”

Can you believe how arrogant this guy is! He says he is not going to accuse the administration of being racist and then blasts away!

And, although the democratic media and Barak himself wants you to believe that he is the typical “boy from the hood”, he was raised in Hawaii by his loving white grandparents (who did a fantastic job, of course). That’s why it is so unnerving to hear Barak “hating on whitie” or lecturing to the white man about “life in the hood”! What crap!