** Nagin did use the city’s buses… to bring people to the SuperDome! **

THIS INTERVIEW BY MAYOR RAY NAGIN OF NEW ORLEANS FROM THE “TODAY” SHOW ON SEPT. 5TH IS COMING BACK TO HAUNT HIM,
VIDEO HERE

“We sent buses out, all throughout the city to get people to come to the SuperDome as a shelter of last resort. Our plan has always been to get them to that particular place. The Convention Center was a second option.”


Were these the same buses that were supposed to be used to evacuate the city per the evacuation plan?

2.) Although, in this interview, Mayor Nagin admits calling residents to the SuperDome and Convention Center before the hurricane, neither facility had adequate accommodations for the thousands of residents who fled there without food or water.

There has been planty of information to back this point up, including:

* The governor did not allow pre-positioned supplies to enter the city
* City police did not allow residents out of the city
* Neither facility was adequately prepared for influx of people as required in the emergency plans and federal officials had pre-warned the city not to expect supplies for up to 72 hours.
* The the emergency evacuation plans were ignored as hundreds of buses were flooded “after” the hurricane hit the city
* Area Hotels managed to evacuate guests after the hurricane
* Money designated for levee work was diverted by local officials
* The mayor and governor were late in calling for the evacuation.

And, the next day he warned that the “second shock would be the amount of dead residents.” Thankfully, his calculations are way off… by nearly 97%! But, how responsible was that announcement? What was he trying to accomplish? And, how did he ever come up with those figures?

Will the Mainstream media revisit this interview by Mayor Nagin?

Or, is the mainstream media going to continue to slant their criticism towards President Bush? 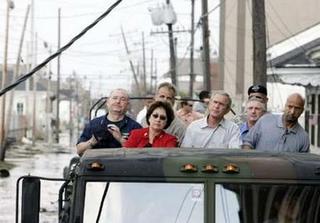 Update: (7:10 PM) Dick Morris on The O’Reilly Factor just agreed that this over-exageration of the casualties in New Orleans by Nagin and the media is going to come back to haunt them.